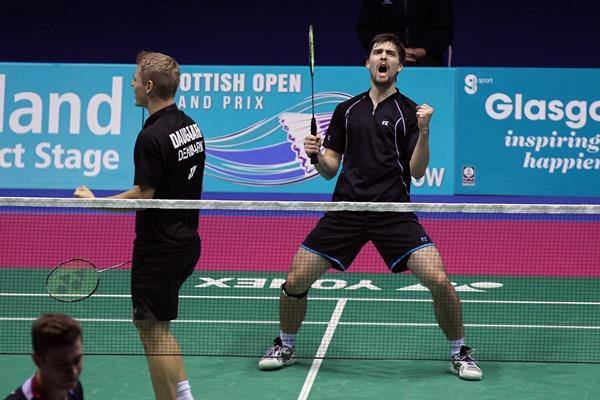 Danish men’s doubles pair Mathias Christiansen and David Daugaard (pictured) are the only champions from 2014 returning to defend their title at this week’s Belgian International in Leuven. The Danes will harbour sweet memories from last year’s win which they followed up with a victory at the Scottish Open GP just two months after, a golden few weeks for the Danes.

Nestled in the top half of the draw the Danes will have their work cut out for them if they are to go back to back in Belgium. An opening round against a Malaysian pair will force the Danes to be ready from the gun and should they win fourth seeds Labar & Careme await in the second round.

Germany have sent a strong team to Leuven and Fuchs & Schoettler will fancy their chances in that ultra-competitive top half of the draw with home favourites Dierickx and Golinski looking to upset the German seeds in the second round.  All eyes will also be on new German pair Lamsfuss and Zurwonne as they start their career together.

Down the bottom half Ellis & Mills (ENG) are still looking to build on their solitary challenge win in Finland since coming together as a pair almost a year ago. The English have Poles Cwalina & Wacha, whom they share a win a piece, and an early second round meeting is hardly what either pair would have wished for.

Team Germany will also have a big say in the final podium positions in the women’s doubles. As third seeds Michels and Herttrich will be hunting their first win as a pair almost a year into their partnership. Germany’s top seeds Goliszewski and Nelte will stand in their way while English duo Smith and Olver will look to come through the bottom half of the draw with relative ease.

Germany will also be favourites in the mixed doubles with world number 14 pair Fuchs & Michels the hot tip for gold. The pair had an emotional match in Leuven back in February in the European mixed team championships and with so much water under the bridge since the Germans will be focused as they attempt to win their first title of the year.

An open book in singles

The singles draw in both the men’s and women’s competition is a completely open book. The opening round tie between Finland’s Ville Lang and Denmark’s Emil Holst will tell a lot about the form and will to win of both players.

Home hero Yuhan Tan has a tough opener against Vladimir Malkov. The Russian has clocked up a lot of air miles recently but this year’s draw represents a real opportunity for Tan to impress at home and give the hugely supportive home fans something to cheer about over the weekend in Belgium.

2015 European Games champion Pablo Abian has the unenviable task of opening his title aspirations against Dane Christian Lind Thomsen in a match that is likely to have exhausting long rallies and don’t be surprised if that one extends well over an hour on court.

An outside shot for the title will be Milan based Indonesian Indra Bagus Ade Chandra. Without doubt one of the most talented players in Europe right now and if Indra can bring his killer instinct to Belgium he is sure to be a match for any player this coming week.

Karin Schnasse has always enjoyed the Leuven courts and as top seed this week the German will be the marked player. Schnasse will be a popular winner if she goes one better that her 2014 result but with Madsen, Blichfeldt, De Visch Eijbergan, Tan and Mette Poulsen on her side of the draw it will be a hard earned title.

Scotland’s Kirsty Gilmour has had mixed fortunes since her Commonwealth Games silver medal. Let’s face it those games are now but a distant memory and all Gilmour has to show for it is a win in Sweden in January. Belgium could be the event that sees Gilmour really bounce back with vengeance and after graduating recently from university it will be interesting to see what her mind set is this coming week. We all know her undoubted talent and once both click she is almost unbeatable at this level. Something tells me this week could be her week!

The big stumbling block for the Scottish number 1 will be 2015 European Games champion Line Kjaersfeldt. The Dane was a class apart in Baku and her mental strength is enough to wear anyone down. A Gilmour/Kjaersfeldt semi-final will produce the favourite for the final.