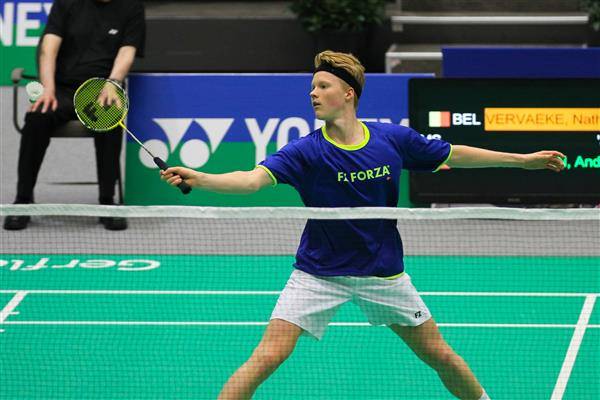 Current European Junior Champion, Anders Antonsen of Denmark, expended little energy this afternoon on day one of the Yonex Belgian International. The rising star of Danish men’s singles eased through his qualification group without dropping a game to book a first round berth against fellow Dane Rasmus Fladberg.

Antonsen (pictured) effortlessly dispatched Belgium’s Nathan Vervaeke in the opening round setting up a repeat of the European junior final against Germany’s Max Weisskirchen. That final back in April went to three games but there was no such luck this time for the German. Antonsen was in no mood for a repeat and blitzed the German 21-6 21-13 in two games.

The young Dane, who has one eye on the upcoming World Junior Championships, beat another German in the final qualifying round sending David Peng home in two games.

“It was a good day here for me. The priority in qualification is always to win but to do it being as economical as possible so to save some energy for the main draw. I lost a bit of concentration in the very final game but other than that I am happy with my performance today” said Antonsen.

A first round tie with Fladberg is a huge incentive for Antonsen and he feels he has the momentum going into that match.

“The last time I played Rasmus I won so I will be hoping for a repeat tomorrow. Rasmus will also be prepared and looking to overturn that result so it should be a good match”

Hungary’s Daniela Gonda created an early qualification upset defeating Germany’s European young player of the year from 2014 in the first round. Yvonne Li after taking the opening game against the Hungarian looked completely lost for ideas in the second and third sets as the powerful Hungarian eased home in three games.

Gonda followed up that win with a two game win over Viktoriia Vorobeva to book her main draw spot against second seed and favourite for the tournament Kirsty Gilmour of Scotland.

There was some success for Germany however as Luise Heim cruised through qualification only dropping a maximum of 13 points in any one game. The plucky German will certainly fancy her chances against Dutch number 1 Soraya De Visch Eijbergen after such an economical start to her Belgian campaign.

England’s Nicola Cerfontyne continues to prove she still has a lot to offer at circuit level seeing off one of Denmark’s young hopefuls Irina Amalie Andersen in qualification while another future Danish star, Julie Dawall Jakobsen looks the real deal and is sure to cause upset in the main draw proper.

There has been some juggling of German mixed doubles pairings over the summer break and today in Leuven these adjustments have already proven fruitful.

Richard Domke and Kira Kattenbeck led the German lines in qualification and Raphael Beck and new partner Jennifer Karnott followed up as Germany took two of the four places on offer in the main draw.

Article and image by Mark Phelan (Live in Leuven)