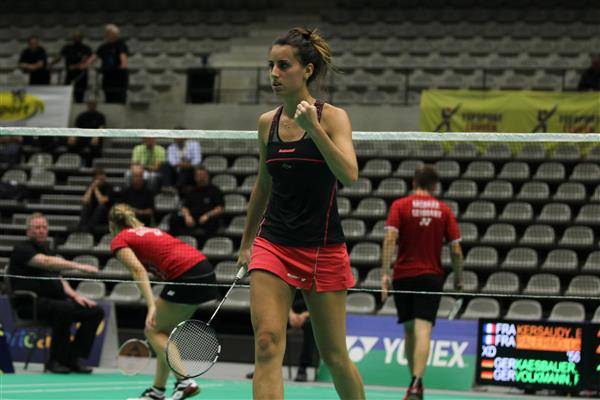 A Peter Gade French team arrived in Leuven this week with a fresh impetus as the Great Dane embarks on his tournament schedule after taking over in the summer as head coach. Already the whole team appears to have benefited from his knowledge and Lea Palermo in particular is starting looking like a real prospect for the future for France.

Palermo (pictured) has forged an impressive partnership with Bastian Kersaudy and the French pair were very impressive in both their main draw matches en route to a well-deserved quarter final spot.

The French powered by the fancied German pair of Kaesbauer and Volkmann in the opening round 24-22 in the third game before putting the challenge of English pair Nottingham and Pugh to the sword in two games.

“It has been a good day’s work for us and we are all learning and enjoying having Peter Gade with us in the French team. Bastian and I have good chemistry on court and we got our tactic right today and we can now really look forward to the quarter final” said Palermo after her win.

The French have doubles reason to celebrate as Labar and Lefele justified their second seeding beating Danish qualifiers Johansen & Nielsen in two games.

Mateusiak & Zieba are looking for their fourth final in four tournaments since coming back together at the end of last season but the Polish veterans will have a tough task against the mixed doubles find of 2015 Seidel & Efler of Germany.

A day for the qualifiers in men’s singles draw

Nick Fransman of the Netherlands led the qualifiers charge today with no fewer than five qualifiers or promoted from qualification players making it through to the quarter finals. The first big name to fall today was that of fourth seed Vladimir Malkov, the Russian losing out to Malaysian qualifier Joo Ven Soong after beating Yuhan Tan in the opening round.

Fransman himself took down both Joachim Persson and Steffen Rasmussen of Denmark to set up a quarter final against another Dane, Christian Lind Thomsen. European junior champion, Ander Antonsen cruised through as expected to the quarter final and German number 2 Dieter Domke rounded of a great day for the qualifiers after beating number 7 seed Thomas Rouxel of France in two close games.

Gilmour finding an extra gear with each passing round

Scotland’s Kirsty Gilmour has emerged as the clear favourite to lift the title this week after the withdrawal of Karin Schnasse yesterday. The Scot cruised through both her opening day rounds with ease and without dropping a game and will fancy her chances in the quarter final against Akvile Stapusaityte of Lithuania.

In a quarter final line up almost devoid of seeds only Rong Schafer (USA) accompanies Gilmour as the sole remaining seeded players. Dutch number 1 Soraya DeVisch Eijbergen was forced to battle her way to the quarter final in three games against Mette Poulsen while at the very top of the draw the name Jin Wei Goh will test all the European that get in her way en route to the final.

Article and Image by Mark Phelan (Live in Leuven)