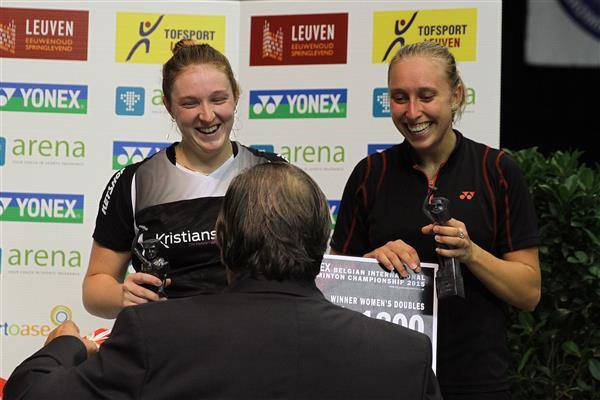 While Anders Antonsen stole most of the headlines this week in Leuven, Sara Thygesen and Maiken Fruergaard (pictured) went about their business essentially under the radar and ended up walking away with the biggest win of their women’s doubles career.

The Danes were certainly not marked out as potential winners of the Belgian International but as the seeds fell they just grew in confidence and in the end were comfortable winners against Malaysian opposition in the first of today’s finals.

Fruergaard and Thygesen got off to a poor start against Choong & Yap trailing 10-4 but as the nerves dispersed the Danes started to find their feet with the experience of Thygesen starting to prove pivotal.

The Danes ended up taking the opening game 21-18 and blew the Malaysians away in the second 21-11 to claim their first international win on the Badminton Europe circuit.

“We were certainly nervous at the beginning of the opening game” said Thygesen “But we never felt out of it and as soon as we found a rhythm we always felt we would win that first game and go on and win the title.”

“It is a great feeling to win and in front of such a great crowd. The Belgian International is certainly as good as it gets on the Badminton Europe circuit so we are delighted to win here” commented Fruergaard.

Antonsen has the badminton world at his feet.

Anders Antonsen proved in Belgium this week why he is Europe’s hottest prospect in men’s singles. To win a tournament with five matches in the main draw is an achievement in itself to do it with three extra matches through qualification is just phenomenal.

The European Junior Champion was pushed all the way in today’s final by friend Christian Lind Thomsen but in the end fate and a huge dollop of talent meant that Antonsen claimed his first international challenge title in Europe.

“I am tired right now as it has been an exhausting week.” Antonsen said immediately after his win “It has been very mentally challenging but I am so happy that I stood up to the challenge and to win well I just could not have believed this when we started on Wednesday”

There was no joy for Scotland’s Kirsty Gilmour in the women’s singles final as 15 year old Jin Wei GOH took the title, like Antonsen, coming from qualification.

Polish veterans Robert Mateusiak & Nadia Zieba took an unprecedented third title from four events since re-forming their partnership at the beginning of the summer.

The Poles were slow out of the block against tournament surprise packet Nordh & Fabbeke of Sweden losing the opening set as Matuesiak failed to spark which the Swedes were quick to exploit.

But that proved to be as good as it got for the Swedish pair as Matuesiak & Zieba came bouncing back to take the second set 21-6 before cruising home in the third 21-8.

“The opening game has always been our problem” said Zieba “We tend to work like a good old diesel engine, taking some time to warm up but when we get going we can keep going at a high rate which is what we did today” said a happy Robert Matuesiak.

It was a case of 1 from 2 today for Poland as Cwalina & Wacha suffered their second defeat to Reddy & Attri of India in as many months with the Indians coming through 22-20 in the deciding game.

For all the final results from Leuven click HERE