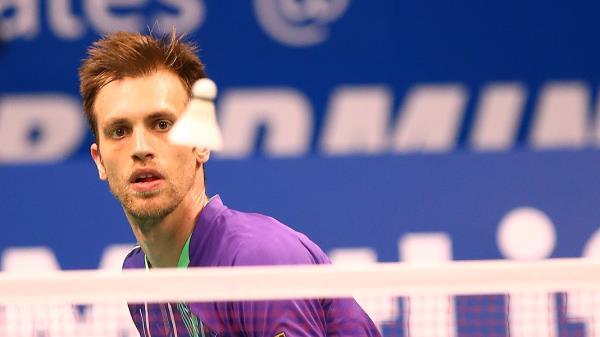 World number 14 Marc Zwiebler (pictured) travels to Prague this week in search of his first title of 2015 as the German looks to find a spark to ignite his Rio qualification campaign and with it his hope for a seeding for next year’s Olympic.

The German will be hot favourite to lift the title in Prague just as he did 12 months ago when Europe was in the midst of the experimental scoring system and in truth this will be a golden opportunity for the 2012 European Champion to kick-start a lacklustre calendar year.

Zwiebler will face off against Finnish number 2 Eetu Heino in the opening round with a possible second round meeting against Swedish number 1, and the man he beat to win his European crown in 2012, Henri Hurskainen.

The German could not have asked for a better draw as top seed as in reality only European Games champion Pablo Abian should ask questions of the world number 14 in that top half of the draw.

After the withdrawal of second seed Brice Leverdez the gate is wide open for someone to come from the pack in the bottom half of the draw. Christian Lind Thomsen will be confident after his run to the Final in Belgium two weeks ago while Emil Holst and Ville Lang really need to find some form in Prague which should be motivation enough for both men. Belgian semi-finalist Indra Bagus Ade Chandra as always has the game to win any circuit tournament.

Kirsty Gilmour will arrive in Prague knowing that the Czech Republic has been a happy hunting ground for her in the past. The Scot who turned 22 this week broke onto the international scene with her Czech International win in 2012 and went on to defend her title in 2013.

Gilmour travels to Prague on the back of an encouraging performance in Belgium only losing out in the final after blitzing Line Kjaersfeldt in the semi-final two weeks ago. The Scot knows how to win and as third seed in Prague Gilmour will be a popular winner should she lift her third title on Czech soil.

Germany’s Karin Schnasse is top seed but has suffered a bit with form in recent weeks after a gruelling tournament schedule. Two weeks break should have done everything to help the German number 1 and Prague will be her platform to bounce back after a poor showing in Guatemala.

There are some mouth-watering early round ties in the women’s singles with the battle between Petya Nedelcheva and Kristina Gavnholt standing out while a likely second round encounter between Natalia Koch Rhode and Line Kjaersfeldt will carry some serious bragging rights along with the tie.

For so long Adam Cwalina and Przemyslaw Wacha have dominated the European circuit amassing win after win post London Olympics. In this qualification campaign the Poles once again are one of the pairs to beat at circuit level but this time around the appearance of Indian pair Reddy & Attri on the circuit has diluted their dominance as the Europeans have repeatedly come unstuck against the Indians over the past months.

In Belgium two weeks ago both met in the final once again and once again it was the Indians who walked away with the spoils but Cwalina & Wacha got as close as they ever did to them on that occasion so will look to finally get the win they have been looking for to kick-start their Olympic qualification campaign. The Poles are also defending champions in Prague and cannot afford to be losing points as the Olympic race hot up.

The Stoeva sisters will be short odds favourites to lift the women’s doubles title. The Bulgarians made their French league debut this week and should the trip to Paris show no ill effects a likely final against Belgian winners Fruergaard & Thygesen is on the cards.

Fuchs and Michels are top seeds in the mixed doubles but the Germans stuttered in Belgium and look to be struggling for form. Mateusiak and Zieba will be hot favourites to win even unseeded and it will be interesting to see how Swedish duo Nordh and Fabekke perform after their run to the final in Belgium where they lost out to the returning Polish veterans.