No big ‘Diehl’ for Ella 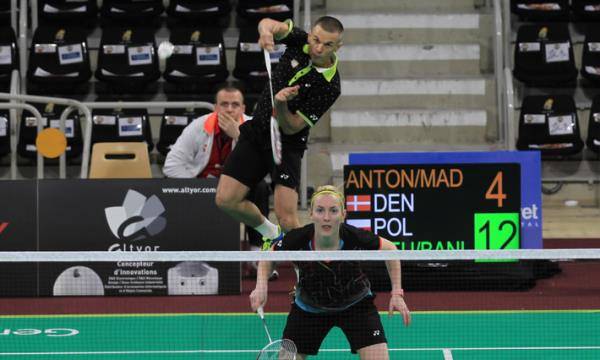 25Ahead of the main draw of the 2015 Orleans International much of the talk was about the relatively new partnership of Imogen Bankier & Robert Mateusiak (pictured). The Scottish/Polish partnership has been a fruitful one at club level, where they play for Chambly in the French league this past season.

Today in the main draw of the Orleans International, Bankier and Mateusiak brought their collective knowledge and world class skills to the international scene in what looks likely to be a new dawn for both.

Bankier has won in Orleans for the past two years so it seemed fitting to come back to Orleans in 2015 and test the new partnership in familiar surroundings.

“This hall has always been good to me having won here the past two years so hopefully this week will give us both a test to see where we are against some of the best pairs on the European circuit” said Bankier.

Mateusiak and Bankier cruised through their opening match against Antonsen and Madsen of Denmark before the real test in the second round against second seeds Ronan Labar and Emilie Lefel.

In what proved to be a real battle the match went down to a deciding set before Bankier and Mateusiak came through 22-20 in almost an hour on Badminton Europe’s TV court.

Ville Lång set his stall out very early in the first round of the men’s singles beating Belgium’s Yuhan Tan in three games. The Finn looked to be in tune mentally and when he is mentally ready he has proven to be a world beater on his day.

Lang blew away Matthias Almer of Austria in the second round to book a quarter final berth with a display that showed glimpses of the form that brought him to the Scottish Open GP title back in November.

“This is certainly the best I have played in four months” the Finn was heard saying during the mid-game interval of the second set against the Austrian.

Lang now plays a rejuvenated Kestutis Navickas after the Lithuanian number one took down 5th seed Lucas Corvee in the opening round before ending the run of England’s Toby Penty in round two.

Kieran Merrilees continued his good form to book a quarter final spot and is the only qualifier left in the men’s singles draw.

Elsewhere women’s singles qualifiers Olga Konon and Ella Diehl continued their march to the business end of the tournament without dropping a set in either the first or second rounds proper. Top seed Beatriz Corrales was taken to three games by Mette Poulsen while Adam Cwalina & Przemyslaw Wacha were made work hard in their opening round of their hat trick seeking tournament before coming through in the men’s doubles in two games against Benz & Jansen of Germany.