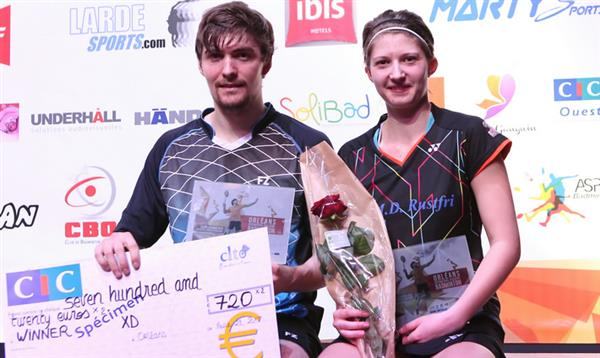 As always finals day at the Orleans International is a spectacle that is unmatched on the Badminton Europe circuit with a set up and experience that is all about entertainment that the players revel in and subsequently put on a magical show for the fans.

This year it was the turn of Mathias Christiansen & Lena Grebak to win the hearts of the adoring French public as they fought their way back from losing the opening game of the final to run out winners in three games to claim their maiden title as a pair.

The Danes were certainly underdogs going into the match against Chan & Goh as the Malaysians were looking for back to back title in Europe after their victory in Poland last week. Mathias Christiansen had woke up ill and after losing the opening game 21-11 it looked like it was to be Malaysia’s day.

Somehow, and after going through 4 rackets, Christiansen pulled himself together to steady the Danish ship and helped by the calming influence of Grebak the Danes were back in it winning the second 21-17

The Danes grabbed the third game by the shirt collar and were never headed to take the title after only a half hour before staring a heavy defeat in the face.

“Of course it is great to finally win our first International together. We have been consistent but never managed to win a title so to do it here in France in front of this big crowd has been amazing for us” said Christiansen after the win.

The future looks bright for English men’s doubles as in Matthew Nottingham and Harley Towler England have appeared to unearth potential stars of the future. Today in Orleans the English pair ended the dream of three wins in a row in Orleans for Poles Wacha and Cwalina and in truth the Polish pair can have no argument about today’s result as they were outplayed for most of the match.

Nottingham & Towler had suffered a heavy defeat to their final opponents only a few short months ago in Sweden and the manner of their improvement since is nothing short of staggering. A defiant two game win today cements the English dream of being top English men’s doubles pair in the future.

“We learned a lot about ourselves when they beat us last time. We had to go away look at our game and figure out how we could adapt and change to these different challenges” said Nottingham.

It was a case of trying to better the result from 2014 for Stefani and Gabriela Stoeva today in Orleans and the Bulgarians did just that against arch rivals from England Heather Olver & Lauren Smith.

A runners up spot in last year’s edition was still fresh in the minds of the Stoeva siblings and today they erased that memory with a hard fought three game battle against the English.

“It was a very tough match today against Heather & Lauren and in the end the good start we got in sets one and three proved to be the difference” said Stefani Stoeva.

Return to form for Zavadsky & Koch Rhode in singles

In a day that was almost fairy-tale like from a singles perspective both Dmytro Zavadsky (Ukraine) and Natalia Koch Rhode (Denmark) put recent bad form and injury behind them to savour the sweet taste of victory for the first time in a long time for both.

Zavadsky had fallen to the outer realms of the top 75 players in the world in recent months so todays win over top seed Andre Kuriawan Tedjono signifies a rebirth for the Ukrainian number 1.

“It has been a tough time the last few months for sure. Results have not been good and confidence low but this week in France has changed all that” said a delighted Zavadsky after his win.

For Natalia Koch Rhode, her first international challenge win could not have come at a better time. The tall Dane had spent a year out of the game with not one, but two broken foot injuries so to taste victory brought probably the biggest smile of the day even if that victory was not in the best circumstances.

The Dane was leading 1 set to love and 11-7 in the second game when her opponent, Soraya De Visch Eijbergen was forced to retire with a suspected Achilles issue.

“Yes this is not the way you want to win a tournament but I felt I was in control throughout the match and in the end I am so happy to win my first ever International challenge”.

Article by Mark Phelan (Live in Orleans for Badminton Europe).
Photo by BadmintonPhoto.