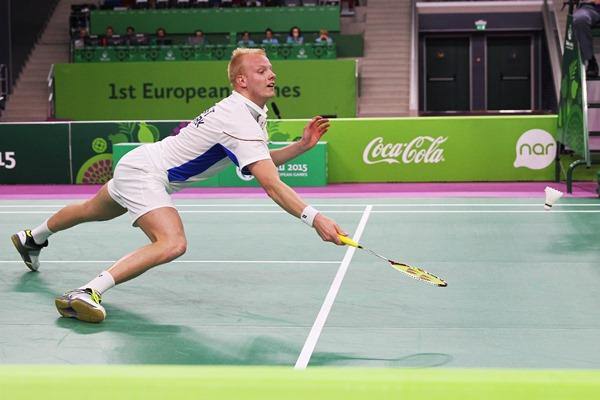 While the past few months has signalled the start of the Olympic qualification process the traditional start to the European season signals a marked step up in the race to Rio as many of Europe’s circuit players re-join the race after the summer break.

The Eurasia Bulgaria International signals the start of a hectic two months on the Badminton Europe circuit with a stellar line up to top circuit athletes travelling to Sofia for the Bulgarian international.

Top seed for the men’s singles is Denmark’s Emil Holst (pictured) who makes his return to international competition after his silver medal exploits in Baku in June. The Dane is joined in Sofia by Estonia’s Raul Must who will travel to Bulgaria full of confidence after his run to the final of the recent Russian Grand Prix, the Estonians best result and which is sure to be a confidence boaster for the hectic few months ahead.
Lurking in the bottom half of the men’s singles draw is Pedro Martins. The uber talented Portuguese will certainly be favourite in many people’s eyes to lift the title in Bulgaria as he to plots his own independent course towards Rio 2016.

Tan growing into the Olympic race

Belgium’s Lianne Tan will travel to Sofia as the marked player after an excellent twelve months that saw her win twice at this level, in Morocco & Romania, in what has been one of her most consistent years on the badminton circuit.

A new found focus and that Tan will to win has projected her to an already enviable position on the road to Rio as both her and her brother Yuhan try to emulate their qualification feat from London 2012.

Like in every Olympic year the draws are just that bit tougher and Tan will have to have her wits about her for her opening round clash against Danish youngster Irina Amalie Andersen. Should Tan make it through that tough opening round an even tougher opponent lies in wait as 2015 European junior champion, Mia Blichfeldt an already established senior player looks to get her new season off to the perfect start.

Czech player Zuzana Pavelkova is seeded two for the tournament but the real threat from the bottom half of the draw may come from yet another Dane, winner of the Orleans International 2015, Natalia Koch Rhode. If Rhode fails to shine then another emerging junior from the Danish ranks Julie Dawall Jakobsen will be only too happy to announce her arrival onto the senior scene as she is definitely one to watch for the future.

Neutrals will look to Nicole Schaller of Switzerland to put an injury blighted 18 months of frustration well and truly behind her as she heads into a new season with renewed vigour while a quick peek at qualification sees the return of 2009 European junior champion Anne Hald Jensen after years blighted by injury.

A new circuit season always brings a new focus from many of the established players plus the natural emergence of some of the outstanding juniors from the previous season. The men’s doubles in Bulgaria is a prime example of this as European Junior Champions from Lubin, Poland Bond & Eipe dip their toes into senior badminton. In fact the Danes will go to Bulgaria as the top seeds which is sure to be yet another new experience for them on their transition to senior courts.

The women’s doubles has a very youthful feel to it also with Heim & Li combining for Germany as second seeds for the title. Croatian hopefuls Galenic & Pavlinic will hope to put the upset of failing to medal at the European juniors from a seeded position behind them as fourth seeds in Bulgaria. European junior champs Dawall Jakobsen & Soby Hansen are also crammed into the bottom half of the draw which is sure to throw up some interesting matches from a not so distant junior past.

Welsh hoping to upset French in mixed doubles in Sofia

The emergence of Carissa Turner and Dan Font as a mixed doubles pairing on the European circuit may prove to be a master stroke for Welsh badminton. The newly formed pair certainly have the experience and credentials to mix it up at circuit level. The French dominate the draw with Kersaudy & Palermo as top seeds and with Corvee/Tran & Maio/Baumann also in the field the wise odds are on a French pair to push towards the title.

All the action in Sofia kicks off on Monday 17th August with the final on Thursday 20th. For all draws and results from the Eurasia Bulgarian International click HERE

Article and image by Mark Phelan.