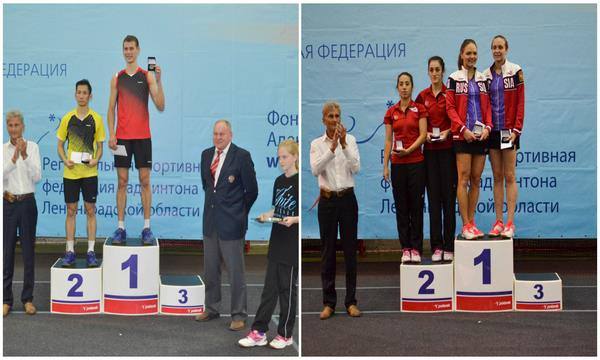 Vladimir Malkov brought cheers to the spectators in Sportshall Arena when he upset top seeded, Tien Minh Nguyen in a battle which lasted 50 minutes. It was the first time the players met on court and this maiden match definitely boosted the confidence of the 29 years old Russian, beating the world no. 35. The win on Sunday will see Vladimir´s world ranking improve a few spots from his current ranking as no.51.

There was more to celebrate for the local spectators when Evgeniya Kosetskay and Ekaterina Bolotova clinched the Women´s Doubles title in three sets against Ozge Bayrak and Neslihan Yigit from Turkey. The Magee siblings, bronze medalist of the 1st European Games from Ireland lived up to their top seeding expectation, winning the Mixed Doubles against the Polish pair of Robert Mateusiak and Nadiezda Zieba.

The Asian presence was also felt in Gatchina when the reunited pair of Koo and Tan from Malaysia and Thi Trang (B) Vu from Vietnam won in their final matches in the Men´s Doubles and Women´s Singles respectively.

The USD 15,000 International Challenge which lasted 5 days ended with the medals ceremony, lucky draws for the audience accompanied by entertainment from local singers. The organizers are pleased with the outcome of White Nights 2015 and are already looking forward to organize it again next year.

The next BEC Circuit Tournament, the Eurasia Bulgaria International will take place in Sofia from 17- 20 August.

For the detailed results of White Nights 2015, click here