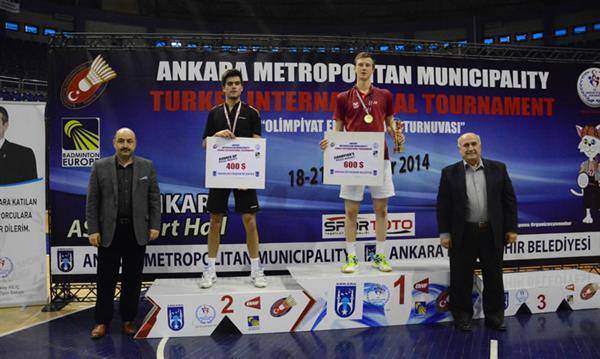 The 2014 Turkey International finished on 21 December 2014 with the five finals played at Ankara Aski Sports hall of Ankara. The men’s singles category saw a really good fight between Austria’s youngster Matthias Almer and Dutch hope Nick Fransman. The latter reached Sunday’s final by beating two local Turkish players on his way to the finals. But it was Almer, the bronze medalist of the 2013 European Junior Championships, who took the Turkish crown in three games and secured his second tournament’s title. The lanky Austria won the Yonex Slovak Open in August.

“I am very happy with my victory but I did not start that well into the Turkey International. I was a bit tired of the tournaments in the last two months. But I was able to increase my level from match to match. In the final against Fransman I was –in the third game – focused and concentrated in the deciding moments of the game”, said Matthias Almer.

Home nation Turkey lifted the women’s singles title as Neslihan Yigit beat her fellow country woman Özge Bayrak in three games. Yigit convinced with a high level performance from day one to the finals day of the 5.000 Dollars tournament.

The men’s doubles title went to the young players Zinchenko and Abramov. The two Russians won in straight games against the Hungarian-Thai combination of Krausz and Atthaviroj. The Stoeva sisters dominated the women’s double categrory. The Bulgarian top duo did not drop a game in the entire competition. In the finals, they beat Turkish stars Ozge Bayrak and Neslihan Yigit 21-11, 21-9. Indonesian sibblings Jansen and Jansen, who both play for Germany, won the mixed doubles final.

The Ankara Metropolitan Municapility gave away more than 5.000 rackets to students in the local schools including 500 badminton education books and 5000 nylon shuttlecocks. This initiative will help to boost badminton in Turkey.