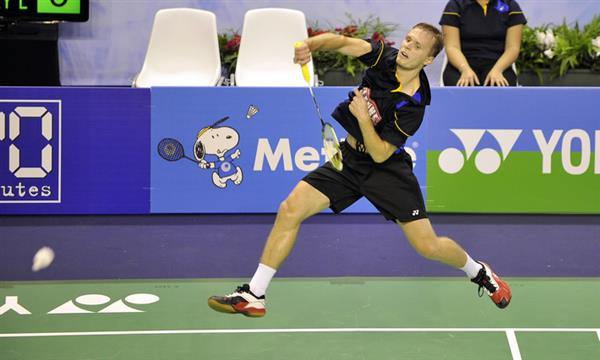 From 8 to 11 January, the Estonian capital of Tallinn will host the first tournament of the Badminton Europe Circuit in 2015. More than 200 players from 28 countries will compete for the Yonex Estonian International crowns and a total of 5.000 US Dollars in prize money.

In the men’s singles, Finnish number two Finn Eetu Heino is the top seed. Home crowd favourite the second seed Raul Must is looking to challenge him for the top spot at the podium. In previous years both players have finished as a runner-ups at this event and are therefore eager to finally claim the title.

“My main goal is to win the tournament but there are a lot of players in the draw who will put up strong opposition. Although I had a slight injury couple of weeks ago, I have now recovered and will do my best”, says Estonian number one shuttler Raul Must.

Olga Golovanova who is ranked 62nd on BWF world rankings is the hot favourite in the women’s singles. But Estonian Kati Tolmoff,  who after five years of retirement has returned to the circuit and has climbed back into the top one hundred in the world rankings,  will do her best to stand on top of the podium on Sunday afternoon.

In the men’s doubles category,  the first seeded French duo of Laurent Constantin and Matthieu Lo Ying Ping hopes  to reclaim the title they won two years ago. But it is expected that they face  strong opposition from the Polish pair Bochat/Pietryja and from the young Danes Antonsen/Babić.

Laurent Constatin is also the highest ranked player together with Laura Choinet in mixed doubles. In women’s doubles event, Victoria Dergunova and Olga Morozova who are ranked 58th on BWF World rankings are the favourites.

You can follow Yonex Estonian International live starting from Friday. Badminton Estonia will bring you a live stream from the two main courts on the events website.