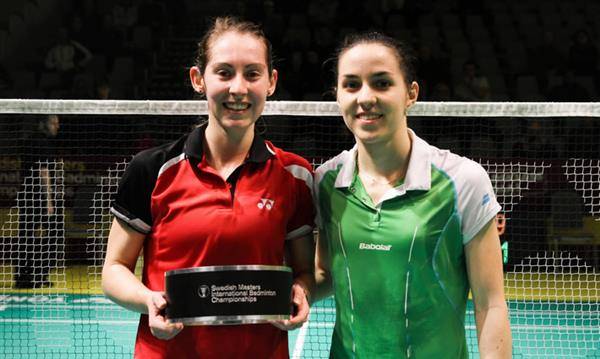 Scotland’s Kirsty Gilmour is no stranger to putting back to back individual tournaments together. She did it at the Czech International in 2012 & 2013 and she repeated the feat this afternoon in the Swedish town of Uppsala winning the Swedish Masters for the second consecutive year.

The Scot came into the event as second seed and on paper was sure to have a battle royal on her hands against top seed and the current form player on the Circuit Beatriz Corrales of Spain. Corrales has had a fistful of podium places in the last two months in Europe as well as winning in Ireland and Wales. However in today’s final the Spanish world number 23 was no match for a revitalised Gilmour as the Scot eased herself to a comfortable win in two games 21-18 21-9.

“It is a nice way to start 2015. It is a good feeling to come back to an event that holds some great memories and defend my title.” said Gilmour “This will be a busy tear with Olympic qualification kicking in come May and Sweden was the start of a good year for me in 2014 so I hope history can repeat itself in 2015”

Just as Sweden has been a happy hunting ground for Kirsty Gilmour so it has been for Kim Astrup. The Dane won his first senior international tournament in Sweden 4 years ago in men’s doubles and came full circle this year by lifting the title once again this time alongside Anders Skaarup.

The men’s doubles match up between Poles Cwalina & Wacha and Danish number two seeds had been the match everyone wanted to see and after a hotly contested first set the Danes ran out comfortable winners in two games with a 21-11 win in the second set.

“It is great to win in Sweden once again as I have so many great memories of my first ever win here four years ago.” said Astrup. “We played well and we won the mental battle on court against the Poles and this gives us great confidence going forward in what we hope in a pivotal year for us as a pair”.

Rajiv Ouseph was the overwhelming favourite coming into the tournament and he duly justified his top seeding by brushing aside the spirited challenge of Spain’s Pablo Abian in today’s final. Such was the dominance of Ouseph the Abian never manage to get in front in the match and even though there were spells of brilliance from the Spaniard, the English number once was more than capable of dealing with any threat posed.

“With the change is calendar this year it was important for me to come to Sweden to get some court time and also get some confidence that comes from winning” commented Ouseph. “I felt I was in control for the whole week, bar one game against Raul Must in the semi-final, and today I think I managed to cope with Pablo’s strengths and style well.”

There were mixed emotions for Nina Vislova in today’s finals as she and partner Anastasia Chervayakova saved one match point against them to come back and win the women’s doubles final in three games against Brown & Robertshaw from England.

In the final match of the tournament Vislova was attempting a double with partner Vitalij Durkiin in the mixed doubles final against Piek and Arends from The Netherlands. However it was not to be for the Russians as The Dutch pair managed a mid-game wobble to win the title in three games in a hall that has been a happy hunting ground for Piek in particular.

“It is nice to come back and win here after winning the women’s doubles last year.” Said Piek "We played well this week and Jacco in particular was outstanding just behind me in today’s final."

Speaking of their future the Dutch were clear about their ambitions going forward in 2015. “This will be the last circuit event for us for some time as it is time we tried to improve more and take on higher ranked players at Grand Prix events and higher.”

Article and Image my Mar Phelan (Live in Uppsala, Sweden).