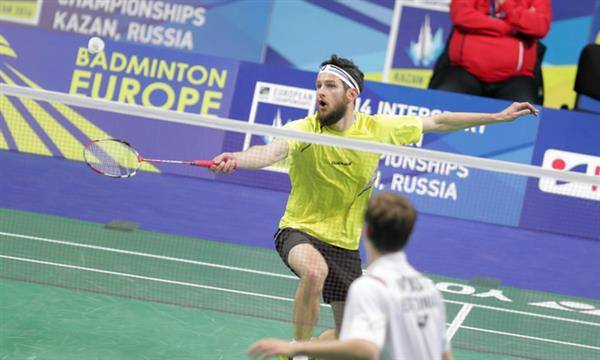 146 players from 23 countries will participate in Iceland International 2015 which will be played from January 22nd to January 25th in Reykjavík, Iceland.  The tournament is an International Series event in the Badminton Europe Circuit and offers a total prize money of $ 5.000.

The tournament, which is a part of Reykjavik International Games www.rig.is, commences on Thursday January 22nd with qualification in the men’s and women’s singles. Main round action will be in all events on Friday 23rd.

Kestutis Navickas (pictured) from Lithuania is the top seed in MS.  He is ranked number 82 in BWF World Ranking and was a member of the Lithuanian team and the EMTC Qualification 2014. Navickas went to the quarter finals in Irish Open in December and in Swiss International in October 2014.  Seeded number two is Milan Ludik from The Czech Republic. He is ranked number 100 in the BWF World ranking. Ludik also played for his country in EMTC Qualification in November 2014. Ludik won Botswana International in December and the South Africa International also in December 2014.

Oliver Schaller and Celine Burkart from Switzerland are top seeded in XD.  They are ranked number 136 in BWF World Ranking and seeded number two are Alexander Bond and Ditte Soby Hansen from Denmark. They are number 302 in the World Ranking and they are the winners of Iceland International 2014.