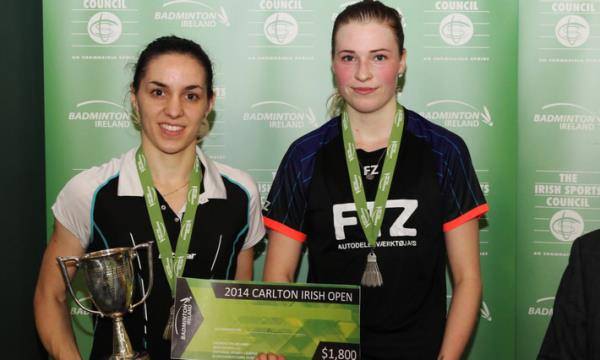 Spain’s Beatriz Corrales banished the memory of her 2013 runners up spot at the Carlton Irish open by taking down 2012 champion Line Kjærsfeldt in today’s final to go back to back on the Badminton Europe circuit after her win at the Welsh Open last week in Cardiff.

It has been a fantastic three weeks for the Spanish ace after her runners up spot at the Scottish Open GP in Glasgow which preceded her pair of victories at the Welsh and Irish Open this afternoon in Dublin.

Corrales edged out Kjærsfeldt in the opening game which seemed to break the resolve of the Dane and after easing into a 6-1 lead in the second game Kjærsfeldt look out on her feet after a fantastic week’s performance in Dublin.

Corrales never looked back after the interval and took the title with a 21-13 win in the second game.

“It has been a good few weeks for me and I am very happy to win here in Ireland after losing in the final last year” said the Spanish ace. “I watched Line play yesterday and she was playing amazing badminton this week so that has made the win even nicer here in Dublin.

Polish top seeds Adam Cwalina & Przemyslaw Wacha retained the title they won in 2013 but were pushed all the way by emerging German pair Zurwonne and Schwenger. The Poles looked a little off colour losing the opening game 21-12 but bounced right back to win in empathic style 21-10 21-18.

“I love to come play in Ireland and this tournament has been good to me over the years” said Cwalina. Other than the slight embarrassment of both of us wearing the shirt with my name on our back the feeling of winning again is a great feeling.”

Danish mixed doubles pair rounded off their 2014 with yet another thoroughly professional performance taking the Irish Open mixed doubles ahead of Käsbauer and Herttrich of Germany. The Danes, previous winners at Dutch and Slovenian Internationals put the disappointment of losing the Scottish Open behind them to claim the Irish title in two games.

“This is a great way to end the year for us in what has been a great 2014” said Nøhr. It has been a good experience to come here and play and of course win in Ireland and we look forward to coming back next year”.

Elsewhere Emelie Fabbeke and Lena Grebak won the Irish title in their last tournament together as a pair while Hong Kong player NG Ka Long Angus took the men’s singles title after dominating the final against Wang Tzu Wei of Chinese Taipei.

For all results from the Carlton Irish Open click HERE