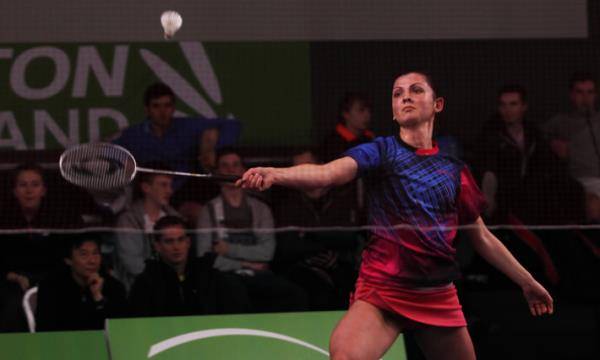 The main rounds of the Carlton Irish Open kicked off in Dublin today and after the home challenge faltered due to injury and misfortune, Germany’s Olga Konon commenced her tournament comeback after 10 long months on the circuit side line.

The German, looking refreshed and full of enthusiasm, came through qualification without dropping a set and continued today where she left off with victories over Georgina Bland (England) and Jenny Wan (Sweden) again in two games.

The Saarbrücken based German was clearly enjoying her return to the competitive court and found it hard to hide her broad smile after booking her quarter final spot.

“It feels amazing to be back on court and win or lose I am just happy to be back playing competitive tournaments again and in the tournament frame of mind.” Said a happy Konon after her productive day. “My knee feels really good and I will take it slowly over the next few months as I build myself back up to match sharpness and fitness.

Top seeds Beatriz Corrales continued her good run of form following her runners up spot at the Scottish Open GP and victory at last week’s Welsh Open with a convincing cruise through her first and second round matches. The Spaniard has been a regular visitor to Dublin over the past number of years and will have her sights firmly set on the top step of the podium after her 2013 runners up spot to Zhang Beiwen of USA.

2012 Champion Line Kjærsfeldt has been the revelation of the women’s singles draw to date, like Konon and Corrales, the Dane has not dropped a set en route to the quarter final but the manner of her dominant wins has set her out as a favourite for the title.

The quarter final of the men’s singles draw is an open book with only one seed left in the draw in a day that say the underdog prevail. First to fall was recent Scottish Open GP winner Ville Lång who had no answers to the onslaught by improving Pole Adrian Dziolko.

That was as good as it got for the Pole and Kestutis Navickas stopped him in his tracks in round two setting up a quarter final battle with the sole remaining seed NG Ka Long Angus of Hong Kong.

The wise money will be on Denmark filling the men’s singles podium spots with four players in the quarter final with the pick of the ties veteran Persson against the young gun Flemming Quach.

Kim Bruun has proved once again that he is one to watch for the future after coming through qualification to set up a quarter final against Scottish Open runner up Wang from Chinese Taipei.

In what was a pretty poor day for the home Irish players there was some light at the end of the tunnel as junior women’s doubles pair of Darragh and Boyle virtually assured their qualification for the 2015 European Games in Baku next summer by virtue of their points haul at their home international after securing their first senior caps for Ireland at the recent 2015 European Mixed Team Championships qualification tournament held in the same venue in Dublin.

For all results from the Carlton Irish Open click HERE