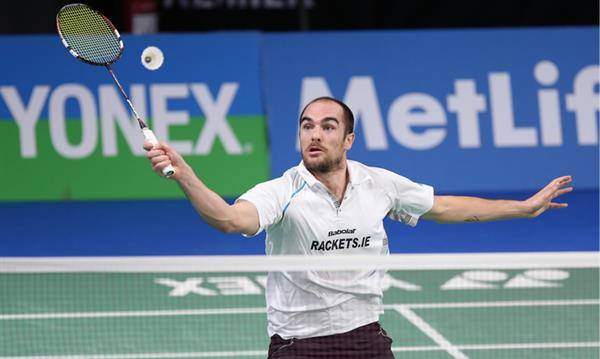 The Carlton Irish Open kicks off this week with a host to Europe’s elite making the trip to Dublin for one of the oldest badminton tournaments on the international calendar. Irish number 1 and 2012 champion Scott Evans comes into the event on the back of his most memorable season to date which has seen him achieve a career high ranking of 31 after wins at the Brazil Grand Prix and runners up spot at the prestigious Bitburger Open Grand Prix Gold.

Indeed 8 of the 10 finalists from the recent Scottish Open Grand Prix will make the trip to Dublin and Evans will certainly not have it all his own way as he tries to claim back the title he won in 2012. Scottish Open winner and 13 time circuit champion Ville Lang will be the most likely challenger to Evans in the men’s singles draw and the Irishman is sure to be happy seeing the flamboyant Finn in the opposite side of the draw.

A tricky first round tie against Chan Yan Kit awaits Evans which is sure to give an indication of the home favourites form very early on in the tournament. The Danish contingent of Quach, Persson, Fladberg and Holst will be expected to go far with German Dieter Domke looking to go one better than his runners up spot from last year.

Chloe Magee will be forced to sit out both the singles and mixed doubles at this year’s Irish Open after sustaining an injury at the recent Hong Kong Super Series. Like Evans the Irish number one has had a decent year and home court advantage would have worked in her favour as one of the fancied players in 2014.

It is not to be for Ireland’s dual Olympian and Spain’s Beatriz Corrales will look to go back to back after winning the Welsh Open only a few short days ago in Cardiff. It has been a productive few weeks for the Spanish number 2 after taking the runners up spot at the Scottish GP two weeks ago and she will be the marked athlete this week in Dublin.

Denmark’s Line Kjaersfeldt is back to try and reclaim the title she lifted in 2012 and alongside her from Denmark will be European Championship runner up Anna Thea Madsen and the feisty Sandra Maria Jensen.
The unseeded English number 1 Fontaine Chapman will be amongst the favourites to lift the title after a good performance in Wales even with a niggling chest infection and even looking down to qualification don’t be surprised to see Olga Konon, returning from injury after almost a year out, and Denmark’s Mia Blitchfeldt causing some panic as they blitz the early entry field.

Nøhr & Thygesen looking over their shoulders

Scottish Open runners up Sara Thygesen and Niclas Nohr have certainly looked the real deal this year on the circuit and travel to Dublin as second seeds behind German duo Herttrich & Käsbauer. The Danes have some tough early round encounters to focus their minds from the outset and a potential second round mixed doubles match against Welsh winners Coles and Brown will test their Scottish recovery as the English ride the crest of their winning wave.

The French pair of Mittelheisser and Fontaine have been uber consistent this year but are still looking for their maiden victory and seeded three this could be their golden opportunity.

Dynamic Danes the pair to beat

Up and coming Danish Men’s doubles pair of Mathias Christiansen and David Daugaard will be hot favourites to lift the Irish title after their season defining recent win at the Scottish Open Grand Prix. It is unbelievable to think the Danes are unseeded and a potential final against top seeds and prolific European circuit winners Cwalina & Wacha is the match everyone will want to see come Saturday’s finals.

There are plenty of potential banana skins for both the Danes & the Poles en route to a final with the Danes hoping their compatriots and European Junior Champions Babic & Antonsen can cause an upset as early as the first round.
Daugaard & Christiansen themselves, who incidentally were runners up to Babic and Antonsen at the European Juniors 2013, will have to be focused from the time they step on the court with a potential second round match against third seeds Schwenger and Zurwonne of Germany. Nestled in the field are the Scottish GP runners up Heinz and Beck (GER) and recent Welsh Open winners Nottingham & Towler (ENG) which serves to make the men’s doubles event one of the most fiercely contested in years.

Unseeded Olver & Smith odds on to go back to back

A trip to Germany for the German Bundesliga where Olver and Smith ended up on opposite sides of the net in a tough two match weekend will ultimately decide if the Irish Open has been just one flight to far in what has been a tough three weeks for the English girls. But on form and on sheer ability the English girls will be the marked pair in an event the Olver has had measured success in the past.

To watch all the action live from court 1 starting Wednesday log on to Badminton Ireland’s YouTube channel by clicking HERE.