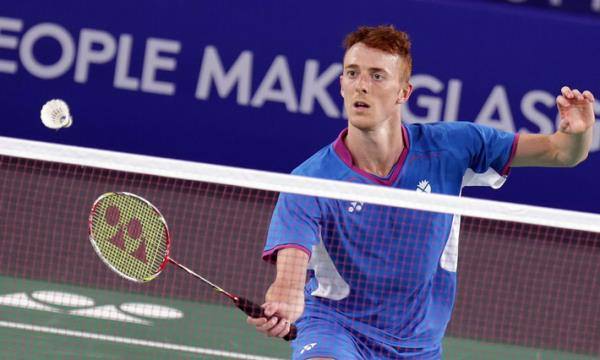 In the men’s singles England’s Toby Penty came up against no 8 seed, Slovenia’s Iztok Utrosa, and after winning a very close first game 22-20, eventually ran out a 21-17 winner in the second. Scotland’s Kieran Merrilees continued his excellent form in this tournament against Austria’s Matthias Almer, conqueror of Pablo Abian in the semis, winning in 2 sets 21-15, 21-16.

In the women’s doubles, the no 1 seeds Bulgaria’s Gabriela & Stefani Stoeva, played the no 4 seeds, England’s Heather Olver & Lauren Smith. This always promised to be a very close affair and so it proved with Olver & Smith just squeezing out the Stoevas 21-19, 21-19. In the other half of the draw England’s Sophie Brown & Kate Robertshaw met fellow English pair Jennie Moore & Victoria Williams, winning the 1st set comfortably 21-7. The 2nd set was much closer but Brown & Robertshaw prevailed 21-18 to move into the final.

In the Men’s Doubles Matt Nottingham & Harley Towler met fellow English pair and no 5 seeds Ben Stawski and Gary Fox.  After winning the 1st set comfortably 21-6, Nottingham & Towler found it tougher in the 2nd but eventually triumphed 21-18. In the other semi the Anglo-Scottish pair of Chris Coles and Paul van Rietvelde faced Scottish pair Gordon Thomson and Adam Hall. Thomson has carried his good singles form into the doubles event and he and Hall eventually triumphed after 3 closely fought sets 21-17, 17-21, 21-18.

The mixed doubles was the 1st final of the evening and the young German pair of Max Weisskirchen & Eva Janssens faced the English partnership of Chris Coles & Sophie Brown. Weisskirchen & Janssens pushed the English pair to 3 games but ultimately couldn’t find the answers to their opponents’ style of play and Coles & Brown took the title 18-21, 21-16, 21-14.

Onto the women’s singles where the top 2 seeds, last year’s runner-up Beatriz Corrales  and Linda Zetchiri were pitched against each other. With a 3 setter that lasted 43 minutes, Corrales went one better this year and took the title 10-21, 21-13, 21-13.

Next was the men’s singles between England’s Toby Penty and Scotland’s Kieran Merrilees,  who continued the excellent form he has shown throughout the tournament, proving too strong for Toby and running out the winner in 2 sets, 21-15,21-10.

Sad to lose another european circuit final at the welsh open today but hopefully my day will come; Well done though to @KieranMERR

The women’s doubles final was an all English affair between Heather Olver & Lauren Smith and Kate Robertshaw & Sophie Brown, who was playing in her 2nd final of the evening. 4th seeds Olver & Smith took the 1st set 21-11 but the 2nd set proved to be much tighter with Olver & Smith eventually coming out on top 21-17 to take the title.

For the 2nd time in the finals it was England versus Scotland in the men’s doubles final with Matt Nottingham & Harley Towler facing Gordon Thomson & Adam Hall. This time it was England who came out on top with Nottingham and Towler taking the title in 2 games, 21-15, 21-13.

Congratulations to all the winners of the #YonexWINT2014. Big thanks to everyone who took part!

Click here for all results of the 2014 Yonex Welsh International.