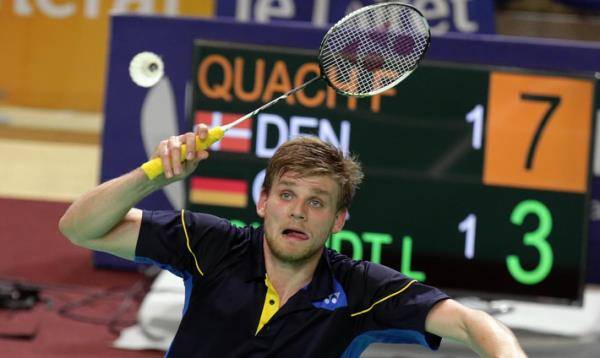 Top seeded German Lukas Schmidt put a roller coaster season behind him by lifting the 2014 Victor Croatian Internaional on Sunday in Zagreb. Schmidt’s victory over Austria’s David Obernosterer in two games prevented a Danish whitewash for the second week in succesion.

Schmidt, who has been openly vocal about his frustrating season, controlled his match against the Austrian from start to finish in what was his first final of the 2013/14 season.

In the women’s singles there was a welcomed return to the top step of the podium for Mett Poulsen. The Croatian International had been tough for the Dane with three of her five matches extending to three sets and had to beat two fellow Danes as well as up and coming Turks, Yigit and Bayrak before lifting the title.

“I had a god feeling the whole week, even though I was Down 14-7 in second set of first match. I kept my head clear and made the right decisions, it’s always tough to play against other Danes, but that’s the game. I cannot remember the last time I felt so confident on court. My shape was also good and I was not afraid to play long rallies which suited me” said Poulsen after her win.

Niclas Nø and Sara Thygesen claimed their first international win as a pair after going so close in France only two weeks ago. The Danes were the quality pair on show this week in Zagreb and Nohr in particular was delighted with his win.

“First win on the European Tour for me and my partner Sara, what a great feeling finally to be at the top of the podium again.”

Denmark continued to dominate the finals day play with Julie Finne Ipsen teaming up with Rikke Hansen to lift the women’s title and there was a first senior win for Danish youngsters David Daugaad and Mathias Christiansen after just five senior international tournaments after graduating from juniors.

Click here for all results from the 2014 Croatian International.