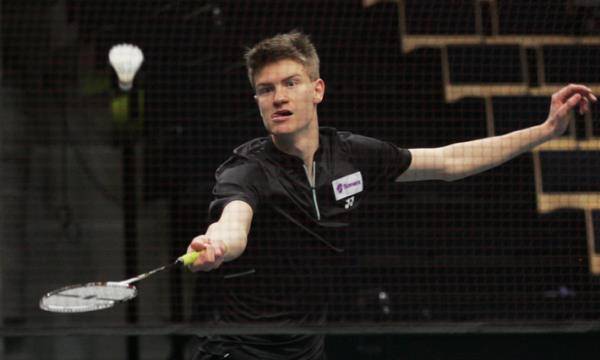 The men’s singles had a jam packed draw of 64 and the performance of the day went to Finland’s own Henri Aarnio who defeated top qualification seed Nikita Khakimov of Russia before seeing of the challenge of Dane Victor Svendsen of Denmark to book a spot in the main draw and all without dropping a game.

The Finn now slots into the tough top half of the men’s singles draw and will now fancy his chances against England’s Toby Penty with one eye on a potential all Finnish encounter with top seed Ville Lang if things should go his way.

European junior bronze medallist from 2011 Kasper Lehikoinen (pictured) will relish the opportunity of playing fellow medallist from that same European Juniors in the same hall, Rasmus Fladberg of Denmark, after the Finn came through qualification in determined fashion.

Kalle Kaljonen rounder off the Finnish men’s singles onslaught and buried his qualifying hoodoo as the young Finn starts to find his feet on the senior circuit. Kaljonen, like Aarnio, slides into the very difficult top half of the draw and will face Irelands Scott Evans in round 1.

Ireland’s other singles competitor and current Irish national champion Jonathan Dolan came through the qualification group of death with wins over Finnish pair Valtteri Nieminen and Ikka Heino before seeing off the challenge of Russian Anatoliy Yartzev to book his first round spot against Sweden’s Gabriel Ulldahl.

Mikkela through as Deprez impresses

Airi Mikkela, who turns 21 this week, got an early birthday present as she stormed through qualification only dropping a maximum of 11 points in any of her matches played.

The women’s singles qualification performance of the day however went to Germany’s Fabienne Deprez who defeated the classy Rong Bo from USA in the first round of qualification before cruising through with an equally emphatic win over Monika Radovska of Latvia.

Karoliine Hoim put her long battle with injury firmly behind her and in the match of the day against fellow veteran Estonia Kati Tolmoff fell to the ground upon claiming match point in a game that had the combined eyes of the hall transfixed for an hours play.

Article and image by Mark Phelan (Live in Helsinki)