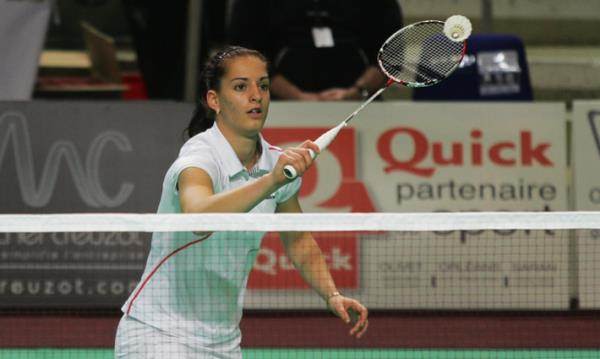 The French International kicked up a gear today as the heavy hitters took to the hall in Orleans. In a day that saw Europe’s female singles player dominate over Asian opposition it was Bulgaria’s European Junior Champion Stefani Stoeva (pictured) that once again stole the limelight.

Softly spoken Stefani, always one to shy away from media attention, normally lets her badminton do her talking and today was no exception. Stoeva came through against Saili Rane of India in her opening round and was made fight very hard for her second round win over the ageless Russian Ella Diehl.

“I am happy with my performance today and against Ella it was very difficult as she played very well today.”

“The last time we played I won much easier and Ella had her chances today but I was pleased with the way I handled the pressure.” Said Stoeva referring to her last meeting with Diehl only two months ago in Sweden

Stoeva will have to take her game to another level in tomorrow’s quarter final as she plays French number 1 Sashina Vignes Waran who herself showed a ruthless streak in beating Sarah Walker and Nicola Cerfontyne, both from England.

The French supporters will be out in force tomorrow as Delphine Lansac moved to the quarter finals after initially being promoted to the main draw from qualification. Reigning champion Beatriz Corrales was untroubled en route to her quarter final berth and Bulgaria’s other seeded player Linda Zetchiri showed form that is certain to highlight her credentials as a podium candidate.

Germany’s Karin Schnaase has the enviable task of facing the last remaining Asian player in the women’s singles draw but will go into her quarter final match against Japans semi-finalist from last year Yuka Kusunose with a degree of confidence in her game.

Just as we had the hand of god incident yesterday court 4 was not finished throwing up its fair share of controversy as the match between Lucas Corvee and Malaysia’s Wong diversified into and debacle of poor officiating that had both players calling for the referee within 5 minutes of each other.

In what proved to be a day to forget for the chair umpire both players were left gobsmacked as they won points then had them taken off them again as the umpire overruled, changed his mind back again before ending up with a score that reflected nothing that actually happened on the court. All this happened not once but twice in a debate that extended to almost 20 minutes at the tail end of a tension filled battle.

It was Corvee who held his nerve and discipline in the end to take the match in three games as the Malaysian stormed of the court without shaking hands and taking out the odd advertising banner as he went on his way.

The rest of the men’s singles draw went according to plan with a full consignment of seeds forging a path to the quarter finals.

Samantha Barning appears back on track after a frustrating six months hampered by injury and alongside partner Iris Tabeling advanced comfortably to the quarter finals of the women’s doubles in Orleans. The Dutch have struggled with form in recent tournaments but hard work and dedication seems to be paying off as confidence returns to their game and the injury begins to be nothing but a distant memory.

The women’s doubles quarter finals will draw a big crowd as there are no less than three French pairs looking to make it through to the semi-finals.

The biggest upset of the day came late in the evening as diminutive German duo Andreas Heinz and Max Schwenger defeated fancied Danish pair Anders Skaarup Rasmussen and Kim Astrup in three games. The Germans had lost twice on previous occasions to the high flying Danes but today turned the tide in what has been a frustrating few weeks for the Danish after some dazzling early season form.

Article and Image by Mark Phelan (Live in Orleans)