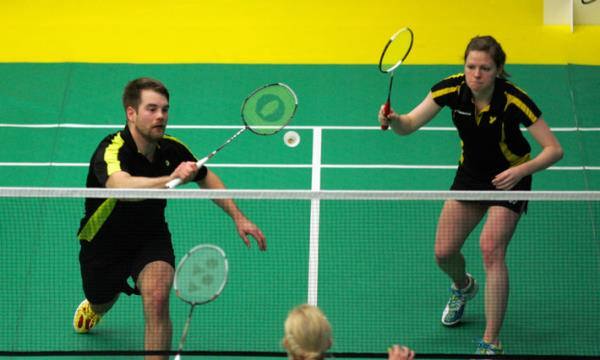 The semi-finals of the 2014 Swedish Masters provided the large home crowd with a feast of badminton with reigning champions Isabel Herttrich and Peter Käsbauer putting up a staunch defence of the title they won in Stockholm 12 months ago.

A new arena and a new focus has been the theme of the week in Uppsala but some things remain the same on the court, one of those being the consistent performances of the German mixed doubles pair who came through two tough matches en route to tomorrow’s final.

The Germans semi-final win over Piek and Arends from The Netherlands was a long way from a classic with both pairs struggling to find any sort of rhythm on court. Selena Piek in particular look completely out of sorts with service error after service error which really tested the mental strength of the Germans.

In the end Herttrich and Käsbauer came through in the deciding set but an honest summation of the match by Käsbauer left the Germans under no illusion as to the task ahead of them in tomorrows final.

“This was a poor game with so many errors which made the mental side of the game more difficult than anything else. I know we have to take our game to another level tomorrow against Blair and Bankier but we are there in the final which is where we wanted to be”

Line Kjærsfeldt has endured an up and down singles career in such a short space of time. However this week the Dane looks as good as she has ever done on court and has brought a new level of speed to her game which her Uppsala opponents have been unable to deal with.

The Dane has not dropped a set on her match to the final and her 21-13 21-13 victory over Sarah walker will have her final opponent Kirsty Gilmour looking over her shoulder. The Scot herself has been impressive and a three game semi-final win over Petya Nedelcheva will have her as slight favourite to lift the title.

Henri brings the home crowd out in droves

The size of the crowd in attendance today was as big as there has been in recent years on the Badminton Europe circuit. The came out for one reason and that was to see their home town hero play on his home court.

Henri Hurskainen duly delivered but was made fight every inch of the way by 2010 champion Pablo Abian of Spain. At 1 game each the Swede look dead and buried trailing 15-10 and again 18-16 but the crowd did its part to lift their hero and Hurskainen took 5 of the remaining 6 points to send the crowd into hysterics.

“This is an unbelievable experience for me” said Hurskainen. “I have always performed badly here in Sweden but today the crowd did its part to take me over the line and into the final. The job is only half done and I still need to focus and prepare properly for the match against Ville Lang tomorrow.”

Elsewhere it will be an all polish men’s doubles final as Wacha/Cwaina and Moren/Szkurdlarcyk justified their top seeding and Selena Piek managed to bounce back from the mixed defeat to reach yet another women’s doubles final alongside Eefje Muskens and the Dutch go for an unprecedented 5 wins in a row in all competitions.

Follow all the finals action live tomorrow from Uppsala from 11.30pm where