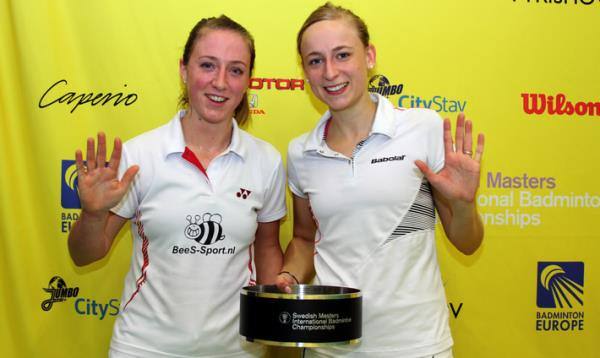 Selena Piek and Eefje Muskens continued their prolific rise to stardom with yet another win in their short career as a pair. What made their victory in today’s Swedish Masters final all the more remarkable is that it was the fifth consecutive victory for the Dutch pair in all competitions.

The Dutch pair continued where they left off at the end of 2013 where they lifted both the Irish and Italian internationals in successive weeks to lift the Swedish Masters this afternoon with a strong victory over 2010 All England semi-finalists Marie Røpke and Line Kruse and firmly establish themselves as the second best European women’s doubles pair after Pedersen and Juhl.

Selena Piek herself had been struggling all week with her form but found her A game this afternoon aided by the sometimes underrated Muskens. The Dutch came out the better side of a close opening set before storming home in the second with a 21-11 win.

“To win five in a row is something that even we never thought was possible when we came together as a pair. It was our second win over Røpke and Kruse and for a while I thought they had us when they changed their tactic mid-way through the second game.” Said Muskens.

“Next for us now is to focus on the nationals and then the European Grand Prix and Superseries events coming up in March so we can test ourselves at the next level.” Said Piek taking about the pair’s future plans.

As top seed many expected Finland’s Ville Lang to feature at the business end of the tournament in Sweden. You never know what to expect with Ville and a series of close matches through the tournament didn’t do anything to inspire confidence.

In today’s final against local man Henri Hurskainen, Lang looked dead and buried when trailing 17-9 and again at 19-13. The crowd assumed that it was just a matter of time before Henri crossed the finish line but nobody told Ville Lang the match was in theory over.

Point by point the Finn pulled his opponent back no matter how the crowd tried to lift their home hero. The writing was on the wall when Ville tied it at 19-19 and quickly won the next two points to take the title which even caught the effervescent Finn by surprise.

“I saw the photographers going behind Henri to get the winning picture when he was so far ahead which motivated me to keep going.” Said Lang jokingly.

“In reality everybody knows me that I tend to give up in situations like that but not this time. I respect Henri to much just to give up in a tournament that is important to him so I kept battling which is something that surprised even myself.” Said a relieved Finnish number 1.

Another tournament another win for Gilmour

Kirsty Gilmour came out on top in an exciting match against a resurgent Line Kjærsfeldt. The Dane was in sparkling form this week and Gilmour was made work hard for her victory. A ‘Gilmour special’ as Kirsty herself calls it, allowed Kjærsfeldt back into the match in the second set before the Scot regrouped to come home convincingly in the third.

“I tend to do this more often than not these days. Win the opening set and then lose the second. But to be fair to Line she went and won that second game with some fantastic play. I am happy the way I came back in the third to win my 5th title which is a nice way to start the year” said Gilmour.

Scotland doubled up with a victory for Robrt Blair and Imogen Bankier in the mixed doubles and in the final match of the day Cwalina and Wacha got off to the perfect start in 2014 by winning yet another title in the all Polish men’s doubles final.

Article and image by Mark Phelan (Live in Sweden.)