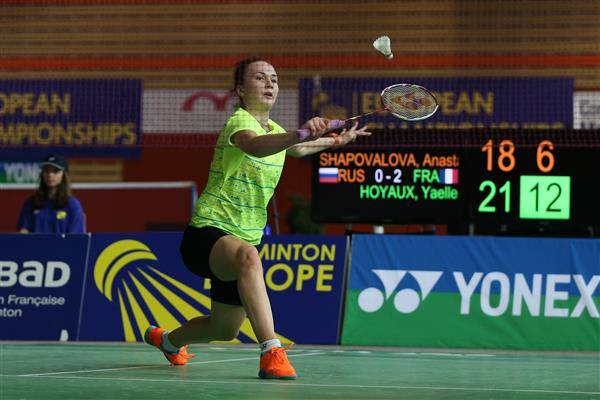 The Under 19’s junior international series tournament, part of the Badminton Europe Junior Circuit took place in Gatchina, Russia from 28 June — 1 July. Young athletes from around Europe took to the courts over four days of heated competition.

In the men’s singles, the fierce competition saw many of the top seeds fall in the second round, leaving Estonia’s Karl Kert (third seed) and Russia’s Amir Khamidulin (eighth seed) as the only seeded competitors through to the quarter finals. The pair then played against one another in a semi-final showdown where the Russian came out on top, with a 21-14 21-14 victory in front of a home crowd. The Russian couldn’t capitalise on his success in the final as Sweden’s Gustav Bjorkler put up a thrilling performance, overcoming the eighth seed 22-20 21-16 21-12.

Meanwhile, the women’s singles saw the top four seeds make it through to the quarter finals, with a mix of Russian, Ukranian and a Malaysian competitor playing for those all important ranking points. However, it didn’t take long for the first seed from Russia, Anastasia Shapovalova, to storm to the victory after overcoming third seed Valeriya Rudakova from Ukraine in the semi-finals 21-9 21-16, and Russian compatriot Olga Kulkova 21-10 21-10 in the final!

Russia also managed to dominate the men’s doubles after securing three out of the four semi finallists spots, leaving Tom Söderström and men’s singles champion Gustav Bjorkler from Sweden to fill the final spot. The swedes managed to overcome Russia’s Dmitrii Klimenko and Vladimir Shipilenko 21-17 21-18 to set up a final against Michael Lebedev and Stanislav Proskura from Russia. In the final, the Russian’s continued with their impressive run, having won every match in two sets throughout the tournament, with a 21-12 21-13 result in the final.

The women’s doubles followed a similar suit, with Russia taking another three out of the four semi final spots, with Ukraine’s first seeds Anastasiya Prozorova and Valeriya Rudakove taking the fourth spot. However, the first seeds went down 21-18 22-24 21-18 to Russia’s Anastasiia Boiarun and Alena Iakovleva who later went on to be crowned champions. In the final, the Russian pair faced compatriots Vilena Asfandiiarova and Anastasiia Shapovalova in three sets, winning 21-19 19-21 21-14.

Finally, in the mixed doubles, English pairing Brandon Zhi Hao Yap and Sian Kelly were the only non-Russian pair to make through to the semi-final, putting up a strong performance against Evgeny Chertilin and Anastasia Osiyanenko in the semi finals with a 21-19 21-11 win. The pair couldn’t hold off Russia from completing a double discipline whitewash after going down 26-24 21-15 against the seconds seeds from Russia — Georgii Karpov and Anastasiia Kurdyukova.