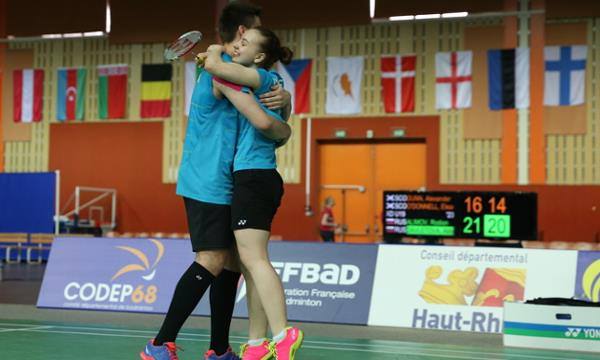 The Russian White nights tournament has come to an end. New winners are crowned and new results are achieved. That meant for Rodion Alimov and Alina Daveltova (Russia) just doing what was expected from them.

Alimov and Davletova were definitely the favorites of this tournament, and not just because they are from Russia. They did not face that much pressure from their opponents. Only in the second round they had to give away a game against new Finnish pair Kaisti/Suutarinen.

The Russians faced Singaporian pair Guang Liang Jason Wong and Putri Sari Dewi Citra in the final. Also this match was no different than the previous matches of the Russians.

Pablo Abian (Spain) won the men’s singles of last year’s edition of White nights. Also this year he was the favorite to win the tournament

However other than the Russian pair, Abian (Spain) had a hard time defending his title. Despite the three over- an-hour matches, Abian was still standing on Sunday.

He faced the always though opponent Ajay Jayaram (India) and after his first game, it seemed that all energy was gone, because of the previous rounds. Then Abian got back up and fought all the way through the second and third game and can call himself the winner of White nights another time.

Read: Brice Leverdez: Top 20 is a step forward for me

The last final of the day was an all-German final between Bjarne Geiss/Jan Colin Völker and Johannes Pistorius/Daniel Hess. This final was definitely a thriller of 57 minutes!

This might also be a good look in the future as these young gentlemen are barely 20. Germany currently has two good men’s doubles pair running at international tournaments and these guys might follow them up.

As for the match it were Geiss and Völker who pulled the longest straw. Keep your eyes open for these names as we might hear more from them in the future!

Find all the results of White nights 2018 here