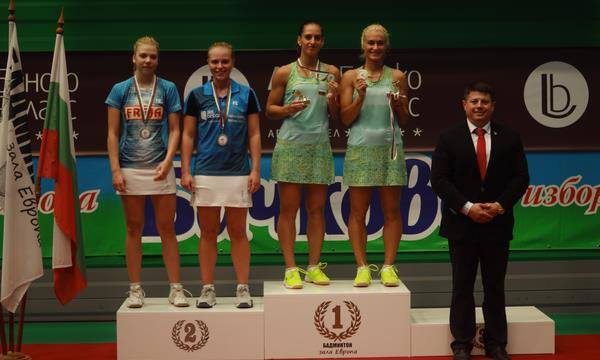 Two pairs of siblings succeeded in Eurasia Bulgarian Open 2018 this week; Stefani Stoeva and Gabriela Stoeva from Bulgaria in women’s doubles and Toma Junior Popov and Christo Popov from France in men’s doubles.

The former is reigning European champions in women’s doubles and also returned to their home country for personal reasons.

— It’s always a pleasure to play at home. For us, it was important that we got chance to be back in Sofia and spend time with our family, Stefani Stoeva explains to Badminton Europe.

— Now when we know that we are #1 in Europe it’s a bit pressure on our shoulders, but we will continue with the hard work and want to make it bigger.

Double-up for eldest Popov
Toma Junior Popov won the men’s doubles with his younger brother Christo, and also managed to take the title in men’s singles. That final was a repetition of the 2017 European Junior Championships final, where Popov also was victorious.

The men’s doubles final was the only final with an Asian entry and the French Popov brothers were challenged into three games by Yu Jun Chen & Bing-Wei Lin from Chinese Taipei; 17-21, 21-7, 21-17.

Christo Popov will attempt to follow in his brothers’ footsteps when he goes to Tallinn for the 2018 European Junior Championships and had a good leadup from this tournament in Sofia.

On their way to the final, the Bulgarians beat the first seeded English pair and Gabriela Stoeva and Jakub Bitman.

Mitsova spoke to Badminton Europe before the tournament started where she talked about the pressure to perform well when playing at home in front of friends and family. But nevertheless, she overcame that fear in her mixed doubles where she was celebrated as mixed doubles winner with Vlaar.

Find all the scores and results on tournamentsoftware.com