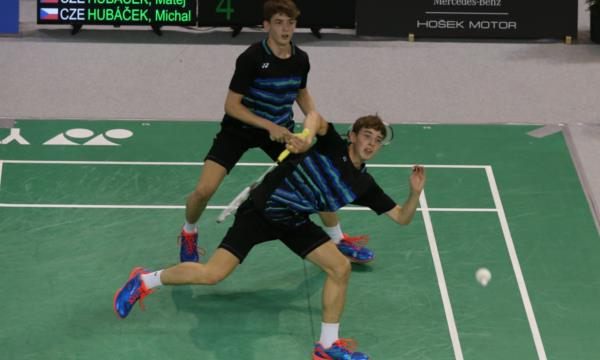 After a successful Bulgarian junior tournament, the Scottish Grimley brothers continued this trending line at the Lithuanian Junior. Even more, Christopher also took the title in men’s singles, while his twin brother reached the semi-final.

Lukas Resch (Germany) avoided that the brothers could meet each other in the final, as he stopped Matthew Grimley in the semi-final. However, Matthew Grimley was not disappointed about this result, as he is recovering from a knee injury.

— It was a busy weekend with a lot of games so I’m feeling quite tired and sore. My knee is feeling a lot better when I’m playing on court but still not 100%, Matthew Grimley stated to Badminton Scotland.

— I thought we could potentially play each other [in the men’s singles final], which would have been good, but I just lost out to Lukas in two close sets. I was happy with the way I played over the weekend though.

Brother Christopher avenged his brother’s loss by beating Resch 21-19 21-11. Earlier, Mathew also had an opportunity himself, with some help from his brother to avenge Resch in men’s doubles. With a win of 21-12 and 21-14, the brothers secured their second title in a row.

— We were confident going into this tournament as we felt that we had been playing well recently and so we expected to get far in the doubles. the brothers stated to Badminton Scotland

‘I managed to play better in my singles [than in Bulgaria last week], which is good leading up to the Europeans [European Junior Championships, September 2018]. Christopher Grimley added to his statement.

Besides Christopher Grimley, there was someone else who managed to take two titles in Lithuania: Magdalena Kulska (Poland). She won the women’s doubles with Zuzana Parysz and the mixed doubles with Wiktor Trecki.

The women’s doubles final was an all Polish one as they faced their compatriots Laura Bujak and Anna Duda. It was a very thrilling match of 3 games, who Kulska and Parysz won in the end.

Kulska had a somewhat easier match in her mixed doubles final. In straight games she and Trecki were too strong for Markus Barth and Sofia Mascali (Norway).

Find all the results of the Lithuanian Junior 2018 here.