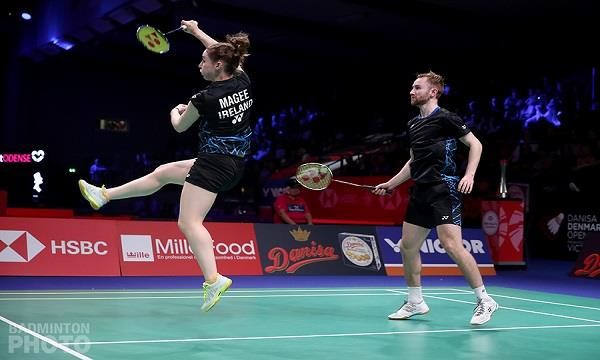 The Irish Open, played in Dublin, has been held since 1902 and is thereby one of the oldest badminton tournaments in the world. With a large qualification day taking place today, the tournament gives a fantastic opportunity to many players hoping to gain valuable experience on the European circuit.

The home fans will be taking a keen interest in the Mixed Doubles main draw commencing on Thursday. Local Irish players Sam and Chloe Magee are number one seeds and looking like strong contenders to keep the title in Ireland. The last time this happened was back in 2012, when Scott Evans was victorious in the Men’s Singles. And before that it was Chloe Magee herself with Huang Bing in the Women’s Doubles in 2007.

The Mixed Doubles pair will have taken a lot of positives from their quarter-finals display in SaarLorLux Open less than a fortnight ago, bowing out in three games to world number 14 pair, Marcus Ellis and Lauren Smith.

In the Men’s Singles, Germany’s Alexander Roovers is hunting down a double of Irish Open titles having won last year. Beating Ireland’s Nhat Nguyen, who this year misses the Irish Open for the World Junior Championships.

Highlights for Roovers are the two quarter-final runs this season in the Dutch and Orleans Open. In round one the German second seed will face Tobias Kuenzi of Switzerland and if all goes to plan, there may be a quarter final match-up against the 8th seed from Poland, Michal Rogalski.