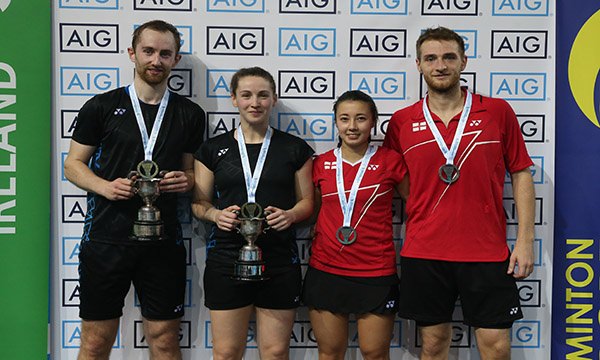 An Irish win on home soil has been a long time in the making. Not since Scott Evans won in 2012 has there been an Irish victory in Dublin at the Irish Open. Today the Magee siblings rectified that statistic lifting the mixed doubles title, their first in their homeland.

After a poor performance in 2017 Irish Open final Sam and Chloe Magee returned this afternoon with a simple goal, win and win well.

-It was important for us to come back to this final this year and put in a performance better than we did last year, said Sam Magee.

The European bronze medallists from 2017 were on a mission in today’s final and dominated the front and mid court exchanges leaving opponents Harley Towler and Emily Westwood of England feeding of scraps.

-We played at a very high tempo today and got on top at the front areas of the court. We also had a bit of luck along the way which helped.

The Irish lifted the title in two sets over their English opposition with the Magee’s complementary of the large home support.

-It was great to see such a large crowd here today to support us. At times I didn’t want to look around as I would have seen so many familiar faces but for sure we could feel their support today.

Leo Rossi (pictured above) landed his first senior singles title at the tender age of 18 today in Dublin. The young French man has been in sparkling form all week and today managed to get the match across the line in two sets against Germany’s Lars Schaenzler.

-After four matches of 3 sets today I managed to win the title in two. Winning the first set was crucial and after that I just felt I could win. I am so happy to win here but I know this is just the start as I want to keep improving and hope one day to play at the very top level.