— It was the perfect first match 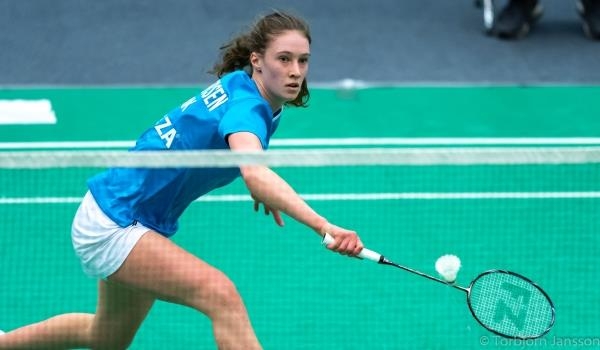 On Day 2 in Lund, the number-one seed in Women’s Single was knocked out, and the number-two seed managed to come back twice.

The Women’s Singles is always a tough category, and often, it is related to surprises. On Thursday, Women’s Singles players who are participating in the RSL Swedish Open had to proof their strong mindset.

Michelle Skødstrup was seeded as number one for the tournament in Women’s Singles. But for the Dane, it was a short experience in Lund: She was being knocked out in the first round, after losing against her Japanese opponent, Hirari Mizui (19-21, 12-21).

The Dutch Women’s Singles player, who is seeded as number two in Lund, was able to win her first match against Marie Bartomene from France (23-21, 21-18).

One year ago, the match between the Dutch and the French already took place at the RSL Swedish Open. But this time, de Visch Eijbergen was able to decide the match for herself.

— I believed in myself. I knew that Marie is a very difficult opponent, she is a strong player. But I managed to control the match, even though I was laying back in both games, she said after the match.

Another Women’s Singles player that got through into the second round is Line Christophersen.

The Dane won against her compatriot, Iben Bergstein. Even though she lost the first game, Christophersen managed to come back and won the following two games (15-21, 21-16 and 21-15).

Christophersen is now playing against Rachael Darragh from Ireland around 6.00 PM (CET), whereas Soraya de Visch Eijbergen is facing Vytaute Fomkinaite from Lithuania around 7.30 PM (CET).

Find the match plan for Day 2 in Lund here

Remember that you can watch all matches in the live in the ‘Badminton Live’ app.