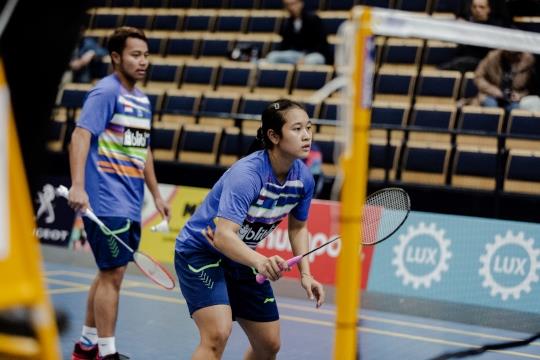 The Danes are fresh from a Swiss Open win but they were unable to continue the trend at the Energia Arena in Vantaa.

The first game was as close as it could have been, virtually point for point at the end but Kusharjanto and Kusamawati were able to take the game with a score line of 22-20.

The second was much more straightforward for the Danes and coming from behind, they managed to win the game 21-15.

Going into the third game, it could have gone either way but, the pressure from the Indonesian opponents looked enough for them to win and they did so, taking the match and the title with 21-14 in the third game.

— I think that we can be a little glad that we could come back in the second set, we found some solutions to come back into the game, Mathias Bay-Smidt told Badminton Europe.

— We thought that we could win if we played a good match but I don’t think we were good enough today and maybe we are a bit tired, Rikke Søby added.

— The next one for us is in Denmark, the Denmark challenge. We just have to get back and practice even harder, Bay-Smidt said.

Søby, speaking after the match revealed that she and Bay-Smidt will do all they can to take the reins with Mixed Doubles.

— We are hoping to practice more together, and play some more tournaments, we will do our best to be the next best Mixed Doubles in Denmark, she said.

Kusharjanto and Kusamawati were very happy to be the title winners of the tournament and have big goals ahead.

-We are very happy to have won the tournament, it is our first tournament together as a pair in Mixed Doubles at an international tournament, Lisa Ayu Kusamawati said.

This is just the beginning,
hopefully, in the future, we can go for the Tokyo Olympic Games in 2020, Rehan Naudal Kusharjanto added.