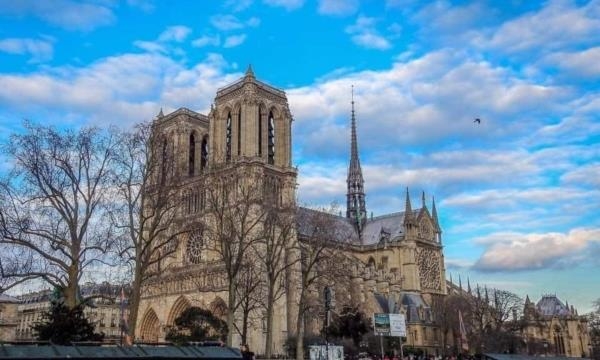 7In solidarity with the sorrow of France and all Europe after the fire at the Cathedral in Paris, the Yonex Latvia International will name one of the 6 badminton courts on behalf of Notre-Dame.

— We are now in the power of emotion after an unsleeping night at the TV screens, in the hope that we can save some of this European symbol.

— Perhaps by the end of May, when the Latvian tournament takes place in Jelgava, people will have forgotten about the fire of Notre-Dame, and it will be overshadowed by more recent events and news.

— That is why I want to put a little fundament on extending these memories right now.

— It is not just a fire, it is a  sacrifice to think about Europe, about values, about all of us,” believes Kristians Rozenvalds, director of the tournament Yonex Latvia International and Secretary General of the Latvian Badminton Federation.

— In the past, badminton courts have been named on behalf of several sponsors in the Yonex Latvia International tournament.

— We have advertised brands like Opel and Renault, Inbox.lv, European Hit Radio, as well as the beverage and beer producers Venden and Rinkuskiai, the perfumery manufacturer Dzintars.

During the badminton tournament, a maximum of 20 games can take place on one of the badminton courts. So 20 times that court name will be resonated in the Sports Hall, by calling the new game on that court.

The name of the court is also published in all tables of the tournament, game descriptions, and live TV and Internet broadcasts from this court.

— At the moment, we are planning to further visualisation this court so that players, coaches and spectators can remember both Notre-Dame’s history, the tragedy of the fire and vision for future, Rozenvalds said.

— Such social advertising, I think, is a good start, something unprecedented in Latvia, Europe and World badminton. It is also an opportunity for badminton and any other type of sport to become more socially important as a public event.

— We will certainly also plan for other years to focus this on something socially topical, not just advertising our sponsors.

— I think that such social initiatives will soon be carried out in other countries’ badminton tournaments, he added.

There is a connection

It should be noted that Yonex Latvia International has a special relationship with the French badminton players.

Traditionally, the French delegation in Jelgava was one of the largest. Three years since the tournament take place in Jelgava, the French badminton players have won 5 out of 15 titles.


Toma Junior Popov, which has been recognised by the European Badminton Confederation for 2 consecutive years as a Junior of the year, in Jelgava won his first title in adult tournaments.


The Yonex Latvia International bringing together 350 players from 40 countries in Jelgava and was one of biggest European badminton tournament in 2018.

It is not yet known whether this record will be beaten this year, but players from countries that have not been represented at Latvian tournaments, including Dominican, Peru, Chile and Australia, have already applied for the tournament.

The deadline for applying for this year’s tournament will be closed on April 30.

More information can be found here