Good performances for hosts in Nicosia

Good performances for hosts in Nicosia 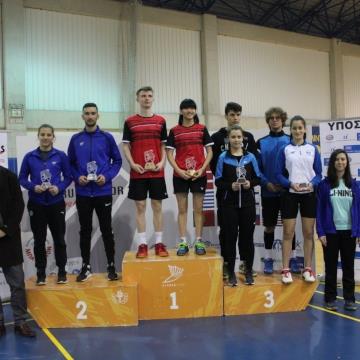 The Li-Ning Cyprus Junior 2019 ended on 21st of April with the finals of all events taking place in Nicosia, Cyprus.

An excellent performance was also given by the hosts who managed to reach the finals in two of the five events, putting on a spectacle in Evangelos Florakis Sports Hall.

Cyprus was represented in the finals of the Mixed Doubles and the Women’s Doubles, bringing back home two silver medals.

Varun Kapur from India won impressively two junior tournaments in a row, after a thrilling match in the Valamar Junior Open 2019 which took place at the beginning of April in Dubrovnik, Croatia.

Back in Valamar, he faced the Spaniard Tomas Toledano, who was seeded as number one.

After the triumph over Toledano in Croatia with a score of 6-21, 21-19, 21-16, the Indian went to the Cyprus Junior 2019 assertively and in the end, reached the first place of the podium. In the Final, which took place yesterday in Cyprus, Kapur beat the Dane Mads Juel Møller by 21-19 in the deciding game.

The German Nguyen is in excellent form

Thuc Phuong Nguyen from Germany was in very good condition physically and technically.

Thuc Phuong Nguyen and his partner Matthias Kicklitz won the gold medal in the Final of the Mixed Doubles as well. The number one seeds fought against the cousins Orestis Pissis and Ioanna Pissi from the host country, winning eventually in two straight games.

The Final of the Women’s Doubles was a contest between the Polish Laura Bujak and Anna Duda, seeded as number one, and the host pair Eva Kattirtzi and Ioanna Pissi.

In the Final of the Men’s Doubles, the Danes Victor Ørding Kauffmann and Mads Juel Møller, played against the number one seeds Stanislav Proskura and Mikhail Shepyrev from Russia and managed to get the better of their opponents with an impressive 21-15, 21-9 victory.

Do not miss the action of the up-coming junior tournaments in April.

Stay tuned on Badminton Europe for more action and results!