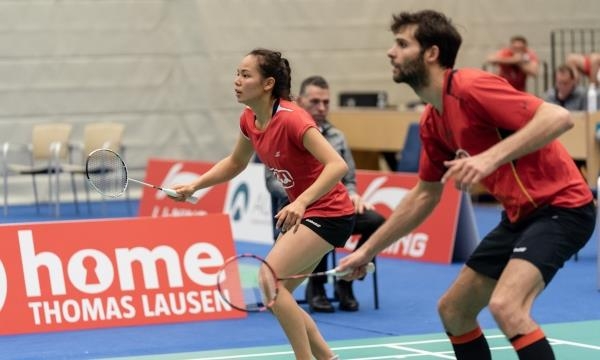 Ronan Labar and Anne Tran have won the LI-NING Denmark Challenge 2019, making it their first title as a pair.

If the first final of today was anything to go by, then for the rest of the day we are in for a treat.

The match was made up of both pairs fighting for points at the highest level, resulting in the match going the distance.

The first game was won by Giquel/Delrue 19-21, coming from behind to win against
Labar/Tran who have been a pair since the start of the year.

The second game was a good recovery from Labar/Tran as they invested a lot of energy to make sure that they did not go out without a fight!

The feeling is great

Labar and Tran have won their first title as a pair, and Labar told Badminton Europe, how much it meant to him.

The pair have also revealed the aims for the future and a bright future for the new French Mixed Doubles pair.

— I feel quite great, we have taken our revenge from the Orléans final, and a very long game once again, so I am very happy with this first title with Ann, Ronan Labar told Badminton Europe.

— It was difficult to settle, we are used to playing them in training and in the final of the  Orléans Masters, but I think we managed the match quite well, Anne Tran said.

— We are hoping to win some good points and then move up to the BWF 100, 200 and maybe super series, as well as moving up the world ranking, Labar revealed.