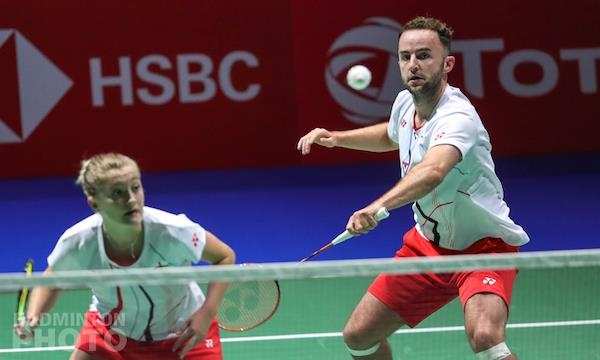 The top seeds in mixed doubles, women’s singles and women’s doubles are ready for the semifinals at Belgian International.

The favourites did well at the morning session at the Belgian International: Three top seeds are ready for the semifinals.

English Ben Lane and Jessica Pugh had to fight hard for their spot beating Bjarne Geiss and Emma Moszczynski from Germany in three close games, 21-19 12-21 21-18.

— We need a better plan for the afternoon, and we have to try to stay more focused. We have to stick to the game plan for more than 50 percent of the time, Ben Lane added.

Yigit needs to do better
In the women’s singles the top seed Neslihan Yigit, Turkey, won in straight games, 21-16 21-15, against Bulgarian veteran Linda Zetchiri, who is seeded seven in the tournament.

— It was a 50/50 performance. I need to do better in the semifinals, but I believe I can win this tournament, Yigit said.

In the men’s singles category Mark Caljouw had to withdraw due to an injury. The Dutch slipped on court on Thursday night and was not able to play on Friday.

One more match – at least – for Stoevas
The best ranked European women’s doubles, Gabriela and Stefani Stoeva, is also ready for the semifinals. The Bulgarians beat Vimala Heriau/Margot Lambert from France 21-10 21-17 despite being 11-3 being in the second game.

— We lost the focus in the second because the first game was easy. I think we were not moving like we did in the first game, and we were taking it too easy. At 11-3 we said to each other that we would not lose the second game, Stefani Stoeva said.

— This is just the beginning. We have one more match tonight, and we want to do our best and hopefully we will win. I hope we will soon reach the same level as we had in the beginning of the year, Gabriela Stoeva added.