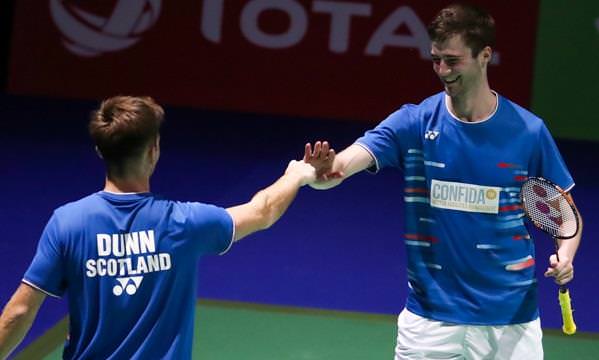 Scottish Open is starting this Thursday in Glasgow, and all the winners of last week’s Irish Open are competing again to prove who is worthy to stand on the podium.

Badminton Europe has spoken with one of the local seeded pairs Alexander Dunn/Adam Hall about their expectations of the tournament. Alexander Dunn shared the following with us:

— Me and Adam are seeded to meet the German pair from our final last week in the semifinal, so that would definitely be a tough opponent to beat if we reach the semifinal. Although, there are no easy games on route, from looking at the draw.

A week ago, in Dublin, Alexander Dunn/Adam Hall reached the men’s doubles final of the AIG FZ FORZA Irish Open 2019, where they played against Germany’s Jones Ralfy Jansen /Peter Kaesbauer. After playing for 61 minutes, the Germans defeated their adversaries in three games: 21-19, 17-21, 21-18.

The number three seeded pair Alexander Dunn/Adam Hall, will play against Andreas Fleischer/ Adam Gozzi on Friday. If they manage to get to the semifinal, they will have the chance of facing their opponents from last week’s final. When asked about what a good result would be for them, Dunn commented:

-The draw has pretty much the same opponents as the Irish Open did, so a good result would be winning the tournament as we have shown last week that we can beat good tough pairs and come extremely close to beating the Germans.

It’s important to be mentally ready
The two players had quite a few tough matches the previous week, but still managed to prove that they are worthy of the achieved results. Even though their first matches seemed to be comfortable wins, the semifinal match was pretty much a fight for a spot in the final, however they’ve managed to nail that one down in three close games: 17-21, 21-19, 18-21.

Regardless of the big number of matches played last week both in the men’s doubles and the mixed doubles, Alexander Dunn feels prepared and confident for the Scottish Open 2019.

— My body feels in good condition even though there were some tough matches in Ireland, so I think it’s more important to be mentally ready for the week ahead and keep our focus level up to produce the high standard we want, stated the Scotsman.

You can watch all matches live on badmintoneurope.tv