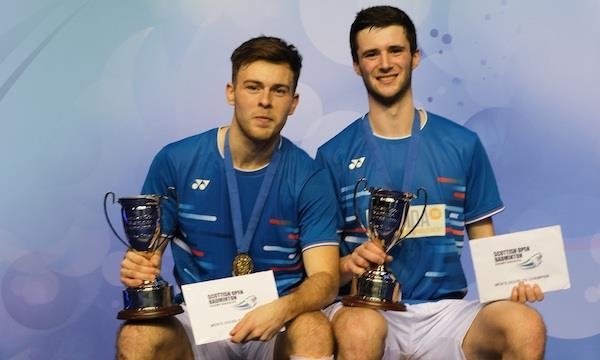 Adam Hall and Alex Dunn made history as they became the first Scots to win the Scottish Open men’s doubles for 36 years on a thrilling final day at the championship.

Not since Billy Gilliland and Dan Travers held the famous trophy aloft in 1983 have a home pairing seized the crown, ending over three decades of hurt and indelibly carving their name into Badminton Scotland folklore.

The dynamic duo were roared on by a raucous home crowd at the Emirates Arena, easing past Danish pair Jeppe Bay and Mikkel Mikkelsen 21-10 21-17 to cap off a memorable week on their local patch.

And Hall, who lost in the final here three years ago alongside former partner Peter Mills, was ecstatic to get that lingering Scottish Open monkey off his back and become a history-maker.

“Part of me was really worried that the 2016 final was going to be my one chance to win here, so the fact I’ve come back and finally won it has really put that to bed,” the 23-year-old said.

“I feel like I can maybe, finally watch that 2016 final back now knowing that I’ve got the win!

“I don’t think you can really put into words how it feels — it’s absolutely unbelievable.

“I’ve been dreaming of this moment since I first started coming here, and to actually finally do it gave me goosebumps out there.

“The crowd was amazing — they really do give us a real lift, especially when the points are getting a bit tight, so when we win one we get a really big boost when they’re screaming and shouting.

“They really make a difference, and when it got tight in that second set we knew they were behind us.”

Dunn, 21, added: “I guess being the first Scots to win here for 36 years does make it more special.

“We’ve been capable of winning this for a long time and to actually do it is really, really good.

“I think focus and being clinical have been important for us — it’s not been an easy road and the final was probably one of our best performances.

“I loved the atmosphere and it gave me goosebumps — my girlfriend was here again today, and that makes it even more special having friends and family here watching when we get the victory.

“We need to continue this forward in our next tournaments and then we can do really well.”

Hall and Dunn’s heroics were accompanied by plenty more drama on court, however, as the finals of the women’s and mixed doubles and men’s and women’s singles were also contested at the atmospheric Emirates.

And India’s Lakshya Sen was the player crowned champion in men’s singles, as the favourite and number one seed came from behind in a classic to beat fourth seed Brazilian Ygor Coelho 18-21 21-18 21-19.

It was an absorbing game to cap off the final day of the event, and Sen — who is coached by Danish legend and the five-time Scottish Open-winning Morten Frost — was delighted to have got over the line.

“I feel very good — it’s a good win and was a very close match, so I’m happy that I won,” the precocious 18-year-old said.

“This is now my fourth title in three months, so it’s a really good win for me and I’m happy with my performance.

“It’s a good hall to play in — I’ve kept it going in the crucial stages this week and haven’t made easy mistakes at the end, so that’s helped me a lot to pull through.

“Morten helps me a lot during training — in the matches he always tells me to keep going until the end, and in that second set he helped me today.”

The entertainment started with a pulsating women’s doubles final, where Amalie Magelund and Freja Ravn followed up last week’s Irish Open crown by beating Julie Finne-Ipsen and Mai Surrow in an all Danish affair.

And it was a thriller to kick-start Sunday’s action, as the pair came back from a set behind to win 17-21 21-15 21-6 and make it two victories on the spin in British tournaments.

“Our tactical skills have worked out very well this week and we’ve had a very good offence, so they’ve been key in how we’ve won all these matches,” Magelund reflected.

“It’s amazing to play here in Scotland — the fans and the atmosphere is amazing and very professional and we’re very happy to win this and the Irish Open.”

Ravn added: “The first set and the first part of the second set were very difficult for us, but we realised it was now or never and we’re very happy to win.

“It’s a good ending to the season and we’re very confident right now.”

And another pair to continue where they left off on the Emerald Isle were Mathias Christiansen and Alexandra Boje, who eased to mixed doubles glory over third seeds Mathias Bay-Smidt and Rikke Soby with a convincing 23-21 21-16 victory.

The second seeds played their way to the trophy without dropping a single set in the tournament, and both were delighted to finish their 2019 season on an unequivocal high.

“It’s never easy when you play a lot of matches in another country and try to perform again, but I think we managed that quite well,” Christiansen said.

“We had some good talks about how we wanted to do it this week and I think we did it quite successfully.

“We’re finishing the season with a lot of confidence — in 2020 we’re going to play the biggest tournaments so it does give us good confidence going back home.”

Extending momentum from a successful Irish Open emerged as the conspicuous theme of the afternoon, as French fourth seed Qu Xuefei became the third player of the day to continue her British hegemony in Glasgow.

“I can’t find the words to say how happy I am — two years ago I lost here in the first round and I was very upset, but now I’ve come back stronger,” she said.

“Last week I played against the same opponent as the final in the Irish Open semi-final, so I had a lot of confidence — but we’ve played four times this year and I’ve lost twice.

“This match has given me a lot of confidence — I’ve really enjoyed playing here and it’s a wonderful hall."

It’s certainly been a Scottish Open to remember, with several home favourites duking it out with some of the world’s elite players over four compelling days of action.

But it was Hall and Dunn who had the final say, forging a brilliant partnership to win their first Scottish Open and making it a tournament to remember for both them and an adoring home crowd.