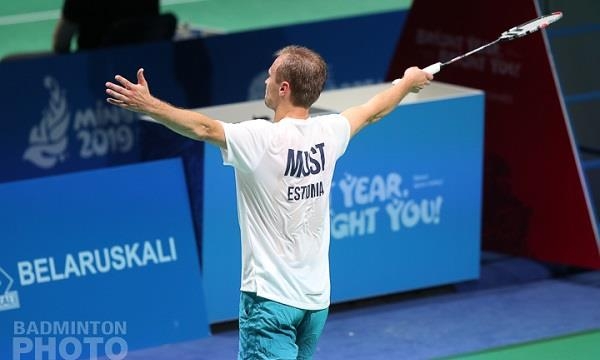 A big name in Estonian badminton is experienced men’s singles player, Raul Must. Playing in his home city of Tallinn, the fifth seed and bronze medallist at the European Games will be looking to put on a good show.

Must, 32, has a chance to double up on his 2017 Estonian International title win. In the first round, he faced Spain’s, Alvaro Vazquez. Despite being 248 in the world, Vazquez put on a credible performance, forcing a deciding game between the two men.

-I was nervous in the beginning, and he played well. He had shots which I didn’t really like. So, I am quite happy that I won.

I would have lost
Talking about the supportive home crowd, Must explains.

-It’s very nice. I think if I were to play that match anywhere else, I would have lost. I had the extra motivation today, so it’s very good.

Must will now play Russian 18 year old, Georgii Karpov, who defeated Germany’s Simon Hsiao in his first round.

You can watch the matches at badmintoneurope.tv.