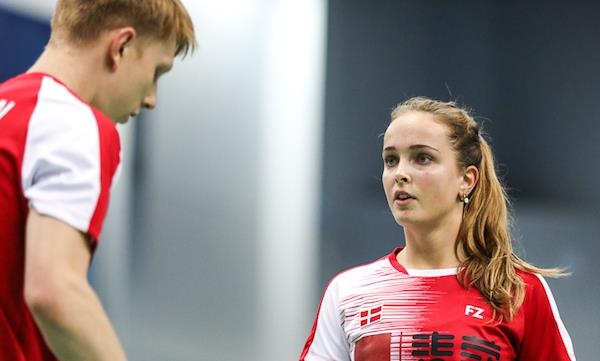 The opening rounds in mixed doubles has been played, and the players are ready for the second round at the Austrian Open.

The fourth seeded Amalie Magelund and Mikkel Mikkelsen secured their spot in the second round after beating Matthew Clare and Hope Warner in the first round.

It was a close first game where the two pairs followed each other until 17-17, where the Danes took four points in a row as well as the first game 21-17. The second game was completely controlled by Magelund and Mikkelsen, who were in front all the time and ended up winning the match 21-11. Tomorrow they will face Anton Kaisti from Finland and Alzbeta Basova from Czech Republic.

— I think we played a fine match especially in the second game, where we played in a higher pace than them and we did not make many mistakes, Magelund stated.

— We just want to play some good matches and hopefully it will be enough to win, she said.

Read also: Astrup and Rasmussen scrape past Koreans into quarterfinal

The young ones do the job

Another Danish mixed doubles, who have made their way to the second round, are Christine Busch and Rasmus Espersen. They faced home crowd favorites Dominik Stipsits and Serena Au Yeong from Austria.

Busch and Espersen were leading most of the first game, but the Austrians stole the game in the very end, 21-18. The Danes kept their head high and won the next two games 21-19 21-13, sending them through to the next round.

— We think we played a good first match. We kept our game plan through most of the match, but our opponents (Stipsits and Au Yeong) also made it difficult for us, Espersen and Busch said.

— We hope to play some good matches and continue working on those things that make us better, they ended.

Tomorrow the young Danes will play against the second seeded Fabricio Farias and Jaquelina Lima from Brazil.