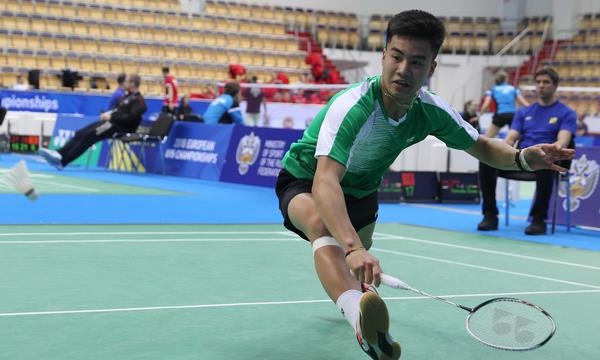 Nhat Nguyen ran his opponent Bobby Stiabudi from Indonesia so close after taking him to a third game, but narrowly missing out on a semifinal spot. The Irish teen had gone ahead in the contest but just could not be consistent and it cost him.

In his run up to the quarterfinal, he comfortably beat opponents from Chinese Taipei, Hong Kong, and Europe’s Vojtěch Sebera from the Czech Republic, in a convincing win in the round of 64, managing the first game 21-1 and the second 21-5.

Nguyen still managed to get further than he managed last year after losing to Chen Shiau Cheng in the round of 32. Now, he has a small break before heading to the Orleans Masters at the end of March where he will be hoping to go and make a name for himself.

France beat both England and Russia but don’t make the podium
In the men’s doubles, Fabien Delrue and his playing partner William Villeger lost in a close contest to South Korean opponents Dong Ju Ki and Chan Wang. Losing the first game 17-21 and the second 16-21.

Villeger narrowly beat opponents David Hong and Ethan Van Leeuwen from England and then went through in a close match against Georgii Karpov and Mikhail Lavrikov to make the quarterfinal-stage.

— It was a very good tournament with a lot of adversity. We played well in some good matches with a fight against the Koreans in a tight match. The experience is huge and we are not far away. We will go back into training and prepare for next time., William Villeger told Badminton Europe.

Grimley lost the first game with some fight losing 17-21, but in the second game, his opponent from Indonesia was just too much for him and he went out losing 12-21, but will take the positives, and experience forward.

The Scot got past three fellow European opponents prior to this stage including Georgii Karpov from Russia and Julien Carraggi from Belgium, after winning the first game 22-20 and the second more comfortably 21-16.

See the rest of the results from the final days at the German Junior here.