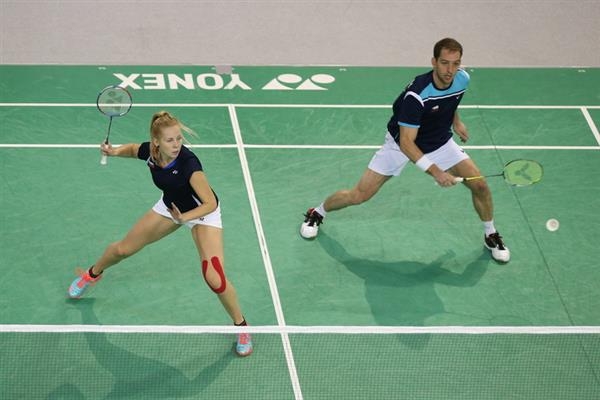 The Czech crowd will certainly be pulling for mixed doubles first seeds Jakub Bitman and AlezbetaBasova, who will be top of the billing at this year’s KaBaL International.

After winning last year’s all-Czech final, the duo feel confident in retaining their title. But despite starting 2018 mainly doing men’sand women’s doubles, Bitman and Basova feel assured that their chemistry will quickly return when it matters.

Outside of them, there are a whole host of pairs looking to make history. Coming in as second seeds, are Denmark’s Mikkel Stoffersen and Susan Ekelund. Even with few matches to show in their current campaign, strong performances elsewhere could see them form a strong partnership over the coming weekend.

The experienced Polish number two men’s doubles pair go into this event as the fourth seeds in what is their first tournament of the year. Tournament wins in Warsaw and Karvina, as well as a final appearance in Kaunas made it a near perfect 2017.

Other pairs looking to topple them are Bulgaria’s second seeded pair Daniel Nikolov and Ivan Rusev, as well as third seeds Magnus Christensen and Fredrik Kristensen from Norway.

There will be more opportunities for the Czech Republic to support their own, as the women’s doubles top seeds are Alzbeta Basova and Michaela Fuchsova. Despite not going deep in many tournaments so far this year,it has been a busy 2018 for Basova and Fuchsova. Coming back home may be the perfect timing for this talented player to collect some silverware.

With them being the only pair ranked inside the world’s top 100, the pressure is certainly on. Looking to capitalise on any possible upset are Norway’s second seeded pair Solvar Flaten Jorgensen and Natalie Syvertsen,as well as Slovenia’s number one pair of Iza and Lia Salehar.

Leading the men’s singles will be Denmark’s Victor Svendsen. Quarter-finals at Vienna and semi-finals at the Portuguese International last weekend has put Denmark’s number seven in good stead for his first title of 2018.

Just behind Svendsen, is the fourth seed Gergely Krausz. It has been a solid start for the Hungarian number one. A strong showing at the Men’s Team Championships and most recently a quarter-finals finish at the Brazil International Badminton Cup puts them as firm contender.

Be also on the lookout for Germany’s Kai Schaefer. The tournaments sixth seed will be looking to exact revenge on Svendsen after last weeks quarter-final defeat in the Portuguese International.

In the women’s singles, a number of determined European players will be looking to secure a much needed title. After coming close a few times already in 2018, Denmark’s Irina Amalie Andersen enters the event extremely confident as the tournaments third seed.

A couple of other players that aim to make an impact in Karvina are Swiss number two Ayla Huser and Agnes Korosi from Hungary.