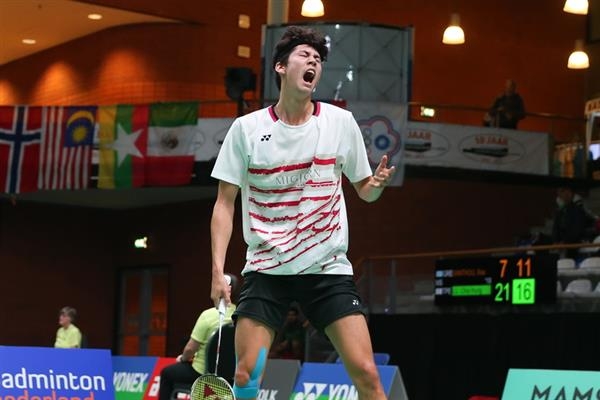 It was almost a historic day for Badminton Europe’s Centre Of Excellence, as one of their own products Felix Burestedt from Sweden came one win away of completing a Cinderella story at the Portuguese International. He fell to Denmark’s Rasmus Messerschmidt, who secured his first career BWF title.

“I’m very happy with the level I showed at this tournament” said Burstedt. “Of course I am a bit disappointed I could not win the last match. But overall it was a really good tournament for me, which give me more motivation to go home and keep moving forward.”

Burestedt believes that his training at COE has been a key factor to his success. “I think the schedule is very good, and I have a good cooperation with the coaches. Combined with good sparring, it is definitely something that is helping me move forward.”

Wins over the fourth seed Kieran Merrilees and second seed Sam Parsons proved to everyone that Burestedt was not going to be a one-off.However, Messerschmidt matched those efforts in his half of the draw with wins unexpected victories over the tournament’s top and third seeds Victor Svendsen and Eetu Heino.

The final saw the Dane begin well and pull away to a 17-9 lead in the first set. Burestedt made a valiant fightback, but Messerschmidt did enough to take the opener. Set number two was a much more competitive affair as both players exchanged the lead multiple times. However when it came to the final stage of the second set, Messerschmidt pulled away to win the last six points of the match and confirm the straights set win 21-18, 21-15.

There was more European success, earlier in the day, in the opening contest of the mixed doubles. It saw Germany’s Peter Kaesbauer and Olga Konon take the title in dominant fashion 21-8, 21-12. A second round upset over Norway’s and tournament third seeds Fredrik Kristensen and Solva Flaten Jorgensen 21-13, 21-10 gave us an early indication of how deep this talented German pair could go in this tournament.

After that, a notable and dramatic come-from-behind semi-final win against Chinese Taipei’s Ye Hong Wei and Teng Chun Hsun 19-21, 21-19, 21-18 put Kaesbauer and Konon in good stead to sail through another Taipei pair of Lu Chen and Li Zi Qing in the final.

It was not quite back-to-back tournament wins for Denmark’s Anna Thea Madsen, as she fell in the women’s singles final in straight sets. Madsen made quick work in early round matches, showed consecutive commanding performances and looked confident to matching her efforts in Vienna two weeks ago.

Not this time for Macpherson and O’Donnell

There was another losing European finalist, this time in the women’s doubles, as Scottish top seeds Julie Macpherson and Eleanor O’Donnell could not quite make it a second title for 2018.

It was a comfortable 21-15, 21-13 defeat to Chinese Taipei’s Li Zi Qing and Teng Chun Hsun. Despite a strong start in the opening set, Macpherson and O’Donnell could not seem to carry that momentum as the Taipei pair sealed the first. The second set did not see the Scottish duo take early control and they quickly lost contact with their opponents.

The day’s proceedings were completed with the men’s doubles. It ended in defeat for Denmark’s third seeded pair of Mathias Bay-Smidt and Frederik Sogaard. Despite winning a number of tight and thrilling encounters to get to the final, they could not turn it around in their 23-21, 21-18 loss to Chinese Taipei’s Lu Chen and Ye Hong Wei.

To see the full results of the Portuguese Open, click here