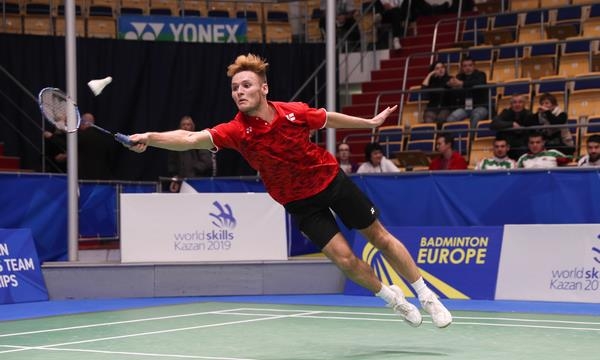 The Portuguese International Championships came to an end today, with Sam Parsons partaking as the 2nd seed. Sam was going into this tournament expecting to reach his seeded spot and get to the final with all the belief that he could have won this tournament. “However, I only progressed to the semi-final despite having a slight problem with my ankle. This was a good learning week and I will come back stronger and a better player. You never lose, only learn”.

This shows the level of expectation and high standard Sam operates to, having steadily improved is world ranking to 75. On being asked about his new all-time high ranking, Sam expressed his delight, but is also looking forward to the next goal. “I am very pleased with reaching number 75 in the world. This has been a big aim for myself in the last 3 months as a milestone in my development. I am now looking to try and break into the top 65 in the world by the end of the season”.

Sam Parsons is aware this will be a tough task but is confident he will get there as he says that “with the hard work and dedication I am putting in at the moment I believe this is possible as I have a great support network behind me with Loughborough University and Steve Butler, my coach I have had over the last 10 years”.

In addition to these positive results, namely winning two international tournament this season (Egypt and Iceland), Sam is really enjoying his Badminton in his new set-up, whilst studying at Loughborough University. He stated that he is able to “train with some good players at the University such as David Jones, Jordan Hart, foreign students who also compete internationally, and also Atu Sagita a former professional Indonesian women’s singles player. We also sometimes have the likes of Toby Penty come to Loughborough for sparring and training which brings in good variety”.

Keeping up his momentum, Sam Parsons was a key part of the England team’s recent success in the European Men’s Team Championships. Playing as second Men’s Singles, Sam won many key matches which helped England on their way to the final, in which they met Denmark. In that final, Sam impressively won England’s only game with a fantastic performance against world number 41 at that time Emil Holst, 21-16, 21-10.

Emil in fact was a finalist of the 2015 European Games in Baku at 24 years of age. Sam Parsons will be 23 come next year’s European Games in Minsk, Belarus. There is an extra buzz around these games as BWF have announced that points for the 2019 European Games will be similar to the ones allocated to European Championships. As a result, the winner will get 7000 points.

Rajiv Oueseph stated, “I can understand that they want to make it more attractive to play in the games and to give it ranking points does that”.

Sam will look to capitalise on opportunities like this in the future. “My long-term goals are to do my best to try and qualify for the European games in 2019 and try to get as close to qualifying for Tokyo 2020. Although this seems a little unrealistic right at this moment in time as Raj Ouseph is so far ahead right now, a lot can happen within 18 months”.

He adds “my main focus is just to keep improving as a badminton player and work closely with my coaches at Loughborough University to keep progressing up the world rankings and see where it takes me. The future is bright”.