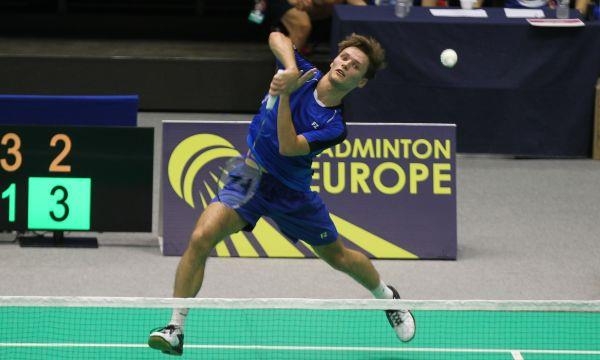 Five months into the year and we’re over a quarter of the way through the BWF International Series calendar. This month, players from around the world will congregate in Medvode, Slovenia from Thursday 10 – Sunday 13 May in the FZ Forza Slovenia International 2018.

With several familiar names from last year’s event, many players will be returning to fight for a higher finish on the podium and those all-important ranking points. In 2017, Europe shared huge success across the board taking the Gold medal in every discipline.

In the men’s singles, three out of the four podium finishers from last year’s event will return to go one step further and finish with a Gold medal, including previous semi-finalists Sam Parsons and Iikka Heino who are now seeded third and sixth respectively.

England’s Sam Parsons has his eyes set on the title.

— I played the competition last year and really enjoyed playing in Slovenia, the hall and courts are set up well. Last year I got to a semi-final and I hope to improve upon this this year and have my eyes set on the title. I have had good preparation up to the tournament and am looking forward to getting into court and showing what I can do, says Sam Parsons

Denmark dominated the Women’s Singles last year, taking three of the four top spots. This year, the tournament will welcome Chinese first seed, Qi Xuefei who will be looking to put an end to the previous European dominance in this discipline. Meanwhile, Germany dominated the Men’s Doubles last year, also taking three of the four podium spots. However, Danish duo Jeppe Bay and Rasmus Kjær who finished second last year will be looking to go one step further too as they enter this year’s event as first seeds.

The mixed doubles follows a similar story with last year’s runner up, Gregory Mairs and Jenny Moore from England looking to take the Gold as this year’s first seeds. Finally, Turkey will be looking to capitalise in the Women’s Double discipline as Bengisu Ercetin and Nazlican Inci take to the draw as number one seeds, while compatriots Busra Unlu and Ebru Yazgan look to rise through the ranks as third seeds.

You can keep up to date with the latest news and results by clicking here.