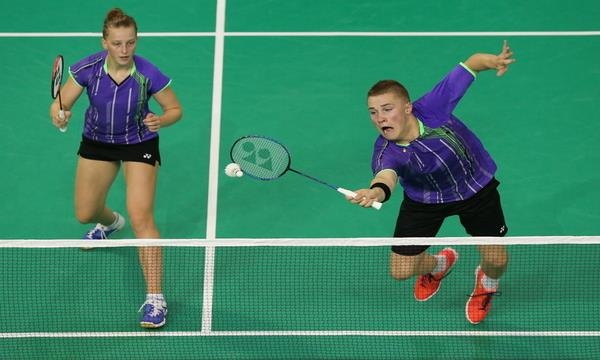 It was another memorable week for French teenage pair Thom Gicquel and Delphine Delrue, who claimed their second title of 2018 at the Dutch International in Wateringen.

The tournaments second seeds completed this triumph with a strong and solid 21-17, 21-14 win over Danish qualifiers Mathias Thyrri and Elisa Melgaard. With them coming into the final as the ‘Cinderella story’, it ended up being one match to many as Gicquel and Delrue ended the tournament without losing a set.

There was more European success in the women’s singles, as Denmark’s Julie Dawall Jakobsen collected her first title of 2018 after a coming from behind to defeat Malaysia’s Muralitharan Thinaah 17-21, 21-15, 21-11. Despite her three last matches going to a deciding set, the tournaments top seed held her form well to move back as Denmark’s number five.

Sadly, that was the last bit of silverware to mention for the European players.

In the men’s singles, Poland’s Adrian Dziolko almost rolled back the years after a narrow three-set defeat to Malaysia’s June Wei Cheam. Including a dramatic 24-22 final set semi-final win over England’s Toby Penty, the former world number 52 had a strong showing throughout the week. As well as a final appearance at the Slovak Open earlier in the year, it may only be a matter of time before Dziolko can capture a title before the year is out.

See also: Adrian Dziolko on his way to find his game back

There were a couple of other near misses, in both the men’s and women’s doubles. Denmark’s rising stars Amalie Magelund and Freja Ravn almost made it a week to remember. After defeating the tournaments second and fourth seeds in back-to-back fashion, they could not quite take down the Chinese Taipei pair of Chang Ya Lan and Cheng Wen Hsing as they fell in the final 21-18, 27-25.

As for the men’s doubles, Russia’s Nikita Khakimov and Andrey Parakhodin had a similar experience, as they had a narrow defeat of their own. It ended up being a 21-19, 21-19 loss in the final against India’s Arun George and Sanyam Shukla.