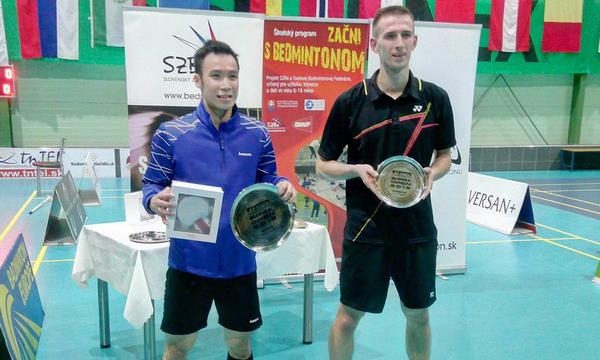 Slovak Open was a very strong participated event. The fact that it was a Future series tournament with no prize money, did not stop the Asian youngsters from participating. These talented Asian players gave the Europeans a tough time, but one European made it all the way till the final.

Adrian Dziolko (Poland) played the men’s singles final against Andre Marteen from Indonesia. ‘I lost to Andre three years ago, so I will not enter the final as the favourite’ Dziolko stated  before his final match. ‘I will try to find my own game’ Dziolko continued.

Unfortunately, Marteen did indeed fulfilled his position as the favourite. Dziolko was not happy after the final.

‘I did exactly what I had to play but my body did not listen to me. And eventually my tactic failed’ Dziolko commentend after his final match.

Adrian Dziolko (Poland) has had a rough year. In September he came back after almost a one-year forced injury break. But it was the time since his return that caught him harder than expected.

Recovery is not easy and getting back to your old level does not happen in one step.
‘When I got back, I could not find my rhythm on court. So my game did not give me much happiness’ Dziolko stated to Badminton Europe.

Reaching the final of Slovak Open shows that he is slowly getting to his old form anyways.
‘In some way I am also glad to have reached the final’ Dziolko stated.

Read: Brice Leverdez: I am happy to be close to top 20

In the next weeks Dziolko is trying to qualify for the World Championships in Guangzhou.
‘There is not much time left till the end of qualification so I will be looking for the best results in the next tournaments’ Dziolko mentioned.

This is why Dziolko does not have much time to be sad about his lost final.
‘Now I have to be focused on the next challenge in Portugal!’

After Portugal, he will play the KaBal international in Czech Republic. Playing in the final of Slovakia can only improves his rhythm for the next two weeks.
‘I am looking forward to find and play my game!’

Find all the results of the Slovak Open 2018 here.