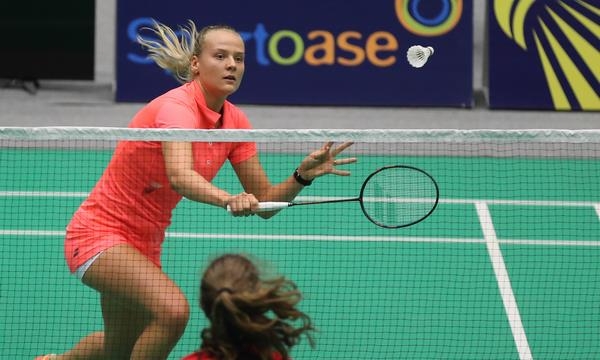 One half of the Estonian women’s doubles with Kristin Kuuba and Helina Rüütel won’t be playing this year’s Estonian International. Kuuba’s focus will instead by solely on women’s singles and she is looking forward to playing in her home country.

— Last few tournaments we haven’t had the best results, a lot of intense games but no good wins, we feel that we are almost there and have the potential to get some really good results, Kristin Kuuba shared with Badminton Europe.

— We were waiting for this tournament and training hard to get the result here in front of our home crowd. We were getting better and better but sometimes life has different plans. My partner Helina broke her thumb bone so we can’t play doubles this time.

Tallinn will from 11-12 January host the first BEC Circuit tournament of 2018. Without the bronze medallists from the 2015 European Junior Championships, Kuuba and Helina Rüütel, the home country will put their faith in the 1st seeded men’s singles Raul Must.

Focus on singles
Since, Kuuba is only focusing on singles and finds her draw quite difficult. Her first-round match will be against 4th seeded Gayle Mahulette of the Netherlands. But the Estonian player will try her best and playing on home court is always a pleasure.

— In singles it is going to be a hard game against really good player but I showed in Norway that It is possible to play successfully in this level and I will do all my best to make it happen. Of course, the home crowd will give me extra motivation and I hope that I can give good emotions for the audience, Kuuba said.

— The goal for this year is to continue progressing both in WD and WS.  We feel that we are moving in the right direction. Coaches are doing good job and we have nice training partners. Step by step, we are coming closer to the top players and we hope that we can show already this year that it is not easy for anybody to play against us.

Favourites from Finland
Anton Kaisti and Jenny Nystrom are seeded 1st in mixed doubles, while Kalle Koljonen take the second seed position in men’s singles which leaves the Finns good chances for leaving Estonia with one or two titles in the racket bag home to Finland.

Also in men’s doubles, the Finns have a strong card in Henri Aarnio and Iikka Heino, that are seeded third. Heino is a permant part of Badminton Europe’s Centre of Excellence and without the top-seeded Scots in his category, the Finnish duo have great chances.

The international series will be streamed live on BETV.

Find the order of play for Day 1 on tournamentsoftware.com