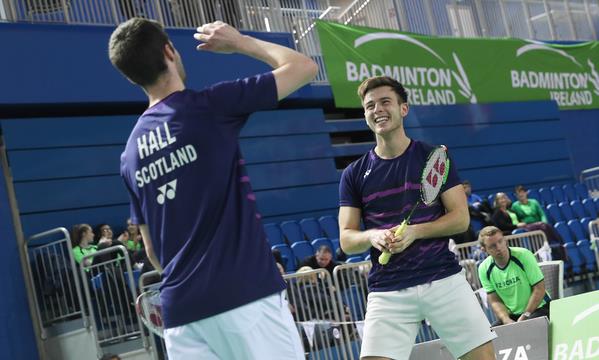 Alexander Dunn and Adam Hall defeated Denmark’s Mikkel Stoffersen and Mathias Thyrri in the final of the Turkey International men’s doubles to add to their Irish Open victory earlier this month.

Danes Stoffersen and Thyrri were a dangerous prospect, having claimed the quarter-final scalp of Polish second seeds Pawel Pradzinski and Jan Rudzinski before dumping out Bulgarians Peyo Boichinov and Ivan Panev, ranked third, to set up the clash with Hall and Dunn.

“We are very satisfied with the victory,” said Hall to Badminton Scotland. “It’s really completed a rollercoaster couple of weeks for us, going from win to first round loss to a win again.

“We are now really just targeting a couple of weeks’ rest to be honest!

Home advantage
The Turkish women players made sure that the hosting country was represented on the finals’ day. Ozge Bayrak defeated the first seeded Neslihan Yigit in the all Turkish women’s singles final.

While the favourites in women’s doubles, Bengisu Ercetin and Nazlıcan Inci did not lose a single set on their way to the final, where they defeated Ilyinskaya and Zharka; 21-13, 21-18.

The Turk men’s singles Muhammed Ali Kurt lost to Lucas Claerbout from France, while the title in the mixed doubles event went to Peter Kaesbauer and Olga Konon from Germany.

Find all the results on tournamentsoftware.com