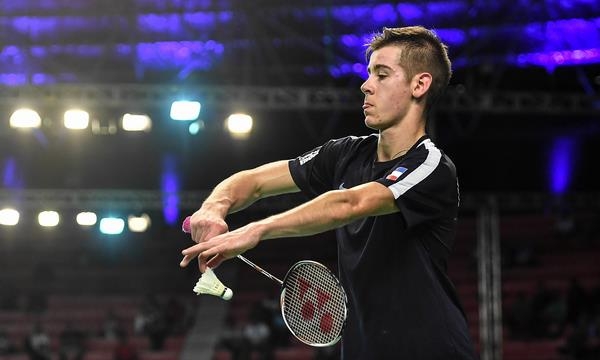 The last three tournaments of the BEC Junior Circuit in 2017 was organized in Portugal, Estonia and Turkey. The French men’s singles Arnaud Merkle was on the podium at two of them and finishes off 2017 close to the top spot BEC Junior Circuit Ranking.

— It was very good to win in Estonia as it was my first international tournament since the World Junior Championships and my level was satisfying even if I was pretty tired due to the hard preparations, Merkle told Badminton Europe.

He did not travel to Portugal for IX Portugal Junior 2017, in the weekend before Estonian Junior. The men’s singles title went, on the other hand, to Julien Carraggi from Belgium, who got the best of the top seeded Dmitriy Panarin from Kazakhstan.

‘Almost’ in Ankara
Unfortunately, for the French, he was unable to continue the streak from Estonia the following week. He was defeated by Kartikey Gulshan Kumar from India in the final at Turkey Junior; 21-13, 12-21, 21-17.

— It was a tough final especially in the third game. He was leading 10-5, but then I came back to lead 14-12, Merkle explained.

— But then he was more successful on some shots and I wasn’t at all. All the tiredness accumulated which made me make some poor choices.

Read an extract from the magazine article: Adcocks — Building a brand

2018 will be a busy year
Arnaud Merkle finish the year of 2017 as no. 2 on the BEC Junior Circuit ranking, where he only has 10 points up to Crisitan Savin at the number one spot. His countryman, Christo Popov, has been ranked higher than him in the beginning of the year, but Merkle finish the year as the best ranked French men’s singles.

— 2017 has been a relatively good year, especially with the silver medal in men’s singles and the team title at the European Junior Championships in my home town of Mulhouse.

— I am really looking forward to 2018 which is going to be a busy year, but I hope that I will do well, improve a lot, and, of course, that I will win many titles.