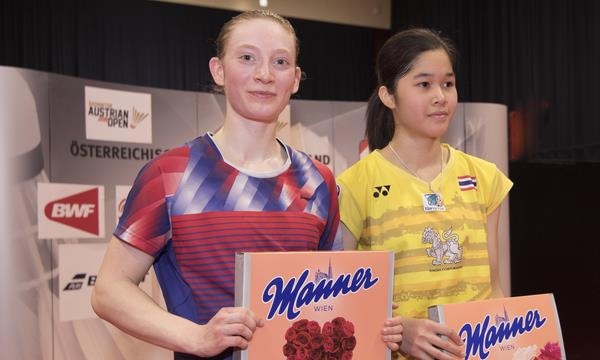 It was a week to remember for Denmark’s Anna Thea Madsen as she took home the Austrian Open women’s singles title without dropping a set. The former world number 34 has been on the road to recovery after having knee surgery. Since her return at the end of 2017, wins in the Irish Open in December and now in Vienna could see her move up approximately 60 ranking places and back inside the top 200.

What was an even more impressive was that the 23-year-old had to come through qualifying to even get to the main draw. After that, notable wins over three seeded players Soraya De Visch Eijbergen, fellow Dane and top seed Mette Poulsen and Turkey’s Neslihan Yigit were the big highlights.

The final saw Madsen edge through the opening set 23-21. Set number two looked to be going the same way. But a late flurry of strong attacking shots saw Madsen secure the title 21-17. This win makes it only the second Dane to win the women’s singles, the first being Mette Pedersen back in 1996.

“It’s been a long and tough week, with eight matches. I have got some tired legs now. Of course I am just really proud and really happy. I think I’ve shown a really good level here in Vienna and beaten some good players. Besides that, I’m also really happy that my knee can take the pressure of eight matches in four days. It’s good to be back.

My goal is to get back to where I was, and actually even higher. It takes hard work and patience, as I don’t have the ranking to be able to get into the bigger tournaments. But I’m fighting for it and working hard towards improvements.”

See also: Madsen taking one tournament at a time

It was a strong week for Europe in the mixed doubles as Russia’s Evgenij Dremin and Evgenia Dimova proved to everyone why there were the tournaments top seeds, as they took down Denmark’s Lasse Molhede and Sara Lundgaard 21-15, 21-13 in the final.

The world number 40 pair had little trouble throughout the week. However, it was a lot harder for Molhede and Lundgaard, in what was an action-packed European-filled bottom half of the draw. A couple of three-set wins over Kasper Dinesen and Alexandra Boje in an all-Denmark affair and England’s second seeds Gregory Mairs and Jenny Moore saw them reach the finals session.

Sadly for them, Dremin and Dimova were just too strong throughout the contest. While Molhede and Lundgaard battled valiantly, the Russians prevented every attack from happening and prevailed in straight sets.

Molhede was back in action, as he and his New Zealand partner Oliver Leydon-Davis reached the men’s doubles final. But sadly, it was a near miss as they fell 25-23, 21-17.

Pre-tournament predictions saw many go for Scotland’s top seeded pair Alexander Dunn and Adam Hall. After looking good for a finals appearance, they could not make it through their semi-final encounter as they lost in three tough sets.

With the men’s singles losing Spain’s top seed Pablo Arain late on due to injury from the recent European Team Championships, it was a much tougher task of a European winner to prevail on finals day.

The best hope looked to be from the third quarter of the draw as both Russia’s Vladimir Menkov and Estonia’s Raul Must came through to battle each other for a place in the semi-finals. After a well fought comeback over Menkov 21-23, 21-18, 21-11, Must was the last European standing. Sadly a comfortable straight sets defeat in the final four was it for the last of the European players.

In the women’s doubles, the semi-finals was the best Europe could produce. Despite two of the four seeds being European pairs, it was the lower-ranked competitors making an impact. Estonia’s Kristina Kuuba and Helina Ruutel ousted a couple of Russian pairs, before falling in three hard sets in their semi-final bout.

In the other half of the draw, a thrilling win over the top seeds by Denmark’s Boje and Lundgaard in the second round had them look confident to making it all the way to the final. However, a narrow straight sets defeat left them empty handed.