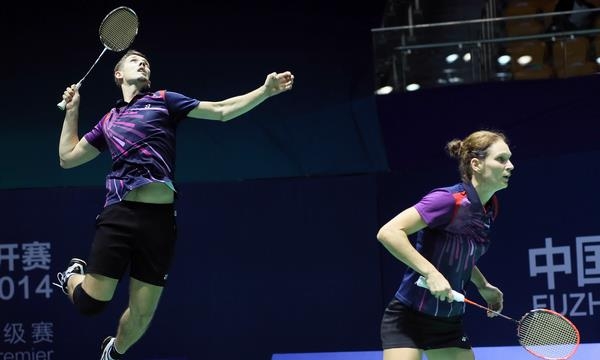 While many of the top European players take a well-earned rest after competing in the European Men’s And Women’s Team Championships last week in Kazan, the 43rd edition of the Austrian Open will give many lower-ranked players a huge opportunity for some much needed points and prestigious silverware.

Leading the way as the highest ranked competitors, are top seeded mixed doubles pair of Evgenij Dremin and Evgenia Dimova.

With second seeds Gregory Mairs and Jenny Moore being over thirty ranking places behind them, expectations in the mixed doubles should see nothing more than victory for the Eastern European duo.

It could very well be more success for Russia, as the women’s doubles top seeds are Ekaterina Bolotova and Alina Davletova. A tournament win at the start of the year in Estonia and two wins in last weeks Team Championships has already given us an early indicator of their intentions to make 2018 a breakthrough year. The European pairs looking to topple them are Scotland’s Julie Macpherson and Eleanor O’Donnell. Two semi-finals and a tournament win in Iceland puts them in good shape for more success on the International circuit.

In the men’s doubles, Scotland’s top two pairs are looking to be favourites to contend for the title. After winning the Iceland International a few weeks ago, top seeds Alexander Dunn and Adam Hall are confident to extend their perfect start to 2018.

But looking to prevent that are their fellow countrymen Martin Campbell and Patrick Machugh. They already achieved a final appearance at the Swedish Open in January, and the tournaments second seeds look strong and the potential of an all-Scottish final is a very possible outcome.

It is all about Spain’s Pablo Abian in the men’s singles. The world number 37 looks set to record his first tournament win of 2018. Despite having very few victories to speak of so far this year including an minor injury at the team championships, Abian still seems to be riding the coat-tails of his impressive end to 2017 with a tournament win at the Italian International. With the next highest ranked player being at least thirty world ranking places behind the top seed, the Spaniard is confident he can over-turn last years singles final defeat.

In the women’s singles, it seems to be a wide open affair. However, eyes will be on top seed Mette Poulsen. The superb efforts of Denmark’s number four at last years European Championships are becoming a distant memory, as there has been little success since that achievement last April.

Other European players that are hopeful to come out as tournament are Turkey’s Neslihan Yigit and Germany’s Fabienne Deprez.